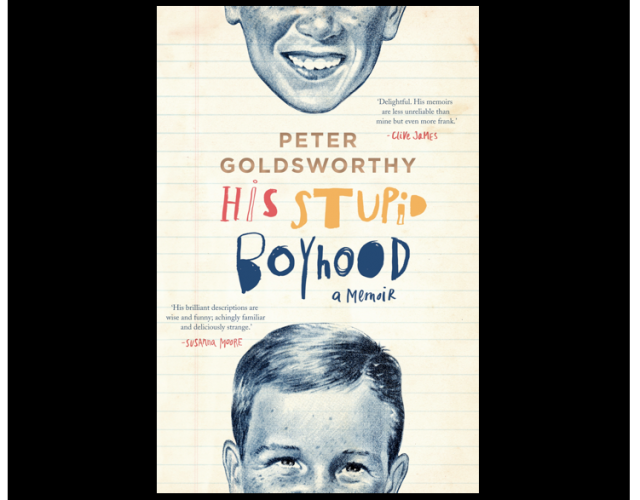 Peter Goldsworthy may be one of Australia’s most accomplished writers, but you wouldn’t know it from the title he’s chosen. Or perhaps you would: this self-deprecating mood colours his memoir — from the bizarre range of childhood obsessions to the first fumblings of adolescence — with sunny, occasionally glaring insight that can only be attained through years of reflection, and skill with words.

Goldsworthy’s memoir covers each year of his life, up until his hospitalisation for a collapsed lung at the age of eighteen. While some may wonder whether it’s worth reading solely about the younger years, the absurdities and misadventures of his early youth have just the right level of excitement and angst to rope a reader in. One example includes the memory of his infant infatuation with the motors of old-fashioned cars, re-told with all the nostalgic humour of hindsight.

One of the most enjoyable aspects of Goldsworthy’s memoir is the obvious influence that his years of creative writing have had on its composition. He structures the work by the various hobbies he pursued with a dedicated enthusiasm; ranging from beetle-collecting to gemstones. These passions are a quirky and effective means of playing with the traditional memoir form, which is typically a chronological retelling of events. Some of the highlights within the book are undoubtedly the moments in which we see the way the people around him react to his interests.

Another bonus is the inclusion of some of his poetry to complement the memoir’s prose. This provides another layer of insight into Goldsworthy’s experiences, and gives the readers a chance to appreciate the breadth of his writing talent. Despite only developing an interest in writing poetry in his late teens, pieces such as “Alcohol” (written later about the discovery that he could brew alcohol in a chemistry set his parents had given him) make it easy to imagine the mischievous joy of his childhood, and what events impacted on him the strongest.

Ultimately, it is the fondness with which he looks back on his younger years that make His Stupid Boyhood so immersive. This is a memoir that will appeal to many different people: those who reminisce on their own past, those who aspire to write, and perhaps most importantly, those who seek the self-awareness that Peter Goldsworthy claims to have finally achieved at the age of eighteen. Although, as he states on the first page, whether ‘[he] fully grew up after that is another story’.