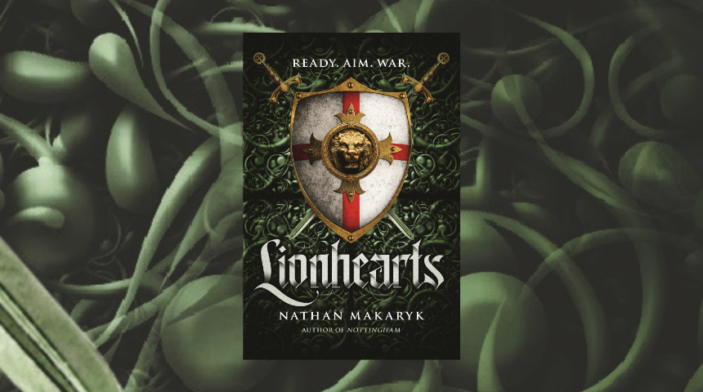 A grief-stricken Will Scarlett takes on the mantle, struggling to balance the need to survive with the desire to end those who have taken everything from him. But he is not the only one calling himself Robin Hood; others have co-opted his friend’s myth, and their intentions are less than pure.

Meanwhile, Marion and John Little lead what remains of their (not so merry) men out of Sherwood Forest, hoping for safety and shelter from a neighbouring lord. After a less than friendly farewell from Scarlett, and Nottingham as a whole, Marion questions the decisions that have led her here. Is it right to use and seek power as she does, even if for a noble cause?

These are just a few of the threads that make up Nathan Makaryk‘s Lionhearts, the sequel to last year’s Nottingham. Picking up directly where its predecessor left off, Lionhearts is a weighty tome, blending together history, myth, and fiction. Opening with a literary “Previously on…”, newcomers should have no trouble jumping straight in, and, given the scale of the plot, returning readers will likely appreciate the reminder too.

Lionhearts is a mixed bag. Bouncing between several viewpoints, the story moves along swiftly, despite its 500+ page count. There’s enough interesting characters to keep the reader mostly engaged too. Ambitious guardsman Quill Peveril is a particular highlight, working alongside vengeful Lord Bevenger as they attempt to track down Robin Hood – or at least one of them, anyway.

But despite the pacing, Lionhearts is still overly long, with a writing style that’s a little too rich for the length. Ken Follett’s Pillars of the Earth springs to mind in comparison; though some editions of Follett’s historical epic clock in at over 1000 pages, there’s a simplicity to the writing that keeps the reader buoyant. Too much description or language that’s too flowery slows things, and while some might appreciate the detail, it did grind this particular reader down.

Lionhearts is also excessively anachronistic. It’s clearly a choice – Marion musing on misogyny in 12th century England (even going as far to use the term “misogyny”) is just one example of this. But, when so much effort has clearly gone into historical research and (mostly successful) attempts to evoke time and place, it’s jarring to see such modern ideas and language displayed so prevalently. That’s not to say it doesn’t have a place in historical fiction. But, here it feels like everything is filtered through a Renaissance Faire-like lens; appealing and, yes, entertaining, but ultimately lacking authenticity.

With the first in the series, Nottingham, garnering favourable reviews, it’s a shame that Lionhearts seems to lose so much steam in comparison. Entertaining, but not particularly engrossing, it’s likely best enjoyed with its companion piece to back it up.

Nathan Makaryk’s Lionhearts is out now, published by Penguin. Order your copy from Booktopia HERE.