Book Review: Luke Arnold’s The Last Smile in Sunder City is a rollicking introduction to the world of Fetch Phillips 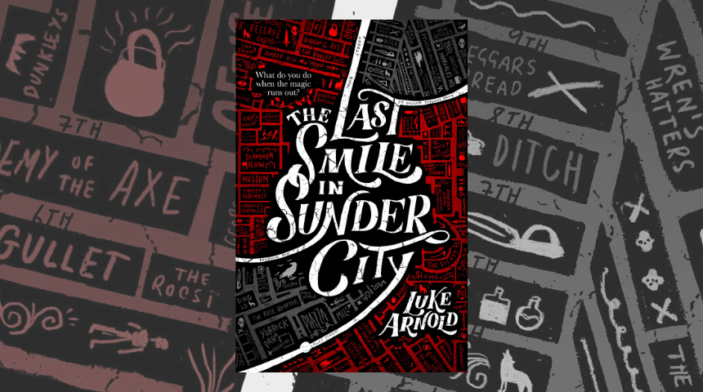 Fetch Phillips’ world is just like ours. Well except for the magic, and all that comes with that: chimera, wizards, elves, vampires and more. But, the magic has gone out, leaving the world irrevocably changed. And, our erstwhile “hero” Fetch might have more to do with it than we imagine.

The Last Smile in Sunder City is the debut novel from actor, screenwriter, director and now author Luke Arnold. You might know Arnold from his work on Black Sails where he played Long John Silver, or his turn as Michael Hutchence in the mini series Never Tear Us Apart. His experience as a screenwriter has served him well; The Last Smile in Sunder City is an accomplished debut, with excellent world building and a rakishly charming yet flawed protagonist at the lead.

Fetch Phillips it is safe to say is of questionable moral character. He drinks (sometimes heavily), he self medicates, and all too often finds himself on the wrong end of someone or something’s fist. So, in short, he’s the perfect guide for the world of Sunder, The Opus and Archetellos. Phillips is a man for hire, reminiscent of those noir-ish detectives, and as witty a lead as Ben Aaronvitch’s Peter Grant, though he tends to err on the wrong side of the law – most of the time. For all his flaws, though, he is trying to do good. He has a promise to keep, and past deeds to atone for.

The world building at work in The Last Smile in Sunder City is impressive. There is a lot of detail fed to the reader across the book’s duration, with plenty of room for expansion in further books. Importantly, the exposition is handled subtly. In quite a nice touch, one of key events in Archetellos’ is unveiled to the reader through a children’s school lecture.

As the novel progresses, we are provided with more and more information about Fetch, his place in the world and his role in events, told through a series of flashbacks. Hints are dropped. And slowly Arnold reveals the full extent and consequences of Fetch’s involvement and actions. More and more it becomes clear to the reader why Fetch is the way he is. He’s certainly no saint. But, it’s better that way. He’s a fully rounded character. Flawed, and because of that, so much more interesting.

With so many species of magical creature and different ground rules to flesh out, fantasy novels can sometimes get bogged down in the details and the exposition, but thankfully not here. Species origin stories are handled deftly, as is the history of certain regions and the politics of the world. The Last Smile in Sunder City is an interesting mixture of elements from high fantasy and the urban fantasy genres. The fact there is no longer magic in the world, makes for an interesting set-up too.

The Last Smile in Sunder City proved to be quite a pacy read. Arnold doesn’t let things drag. Instead the action moves along quite nicely. There’s almost a cinematic quality to the novel. Certainly, it wouldn’t surprise me if it eventually got picked up for a TV adaptation. Despite the brisk pace of the action, there are a number of interludes and breaks. These don’t necessarily progress the plot. Rather, they show the ways in which the people of this world are reacting to their changed circumstances – and they do it very well. They also often involve Fetch interacting with others, which is always a bit of a treat.

The Last Smile in Sunder City is an assured and entertaining debut. A fresh take on the fantasy genre, nestled amongst it’s mentions of satyrs, vampires and chimera there’s arguably a subtle, yet timely, ecological message. The novel also introduces us to a wonderful new fictional man for hire, and I, for one, hope we’ll be back visiting Fetch Phillips and the people of Sunder again soon.