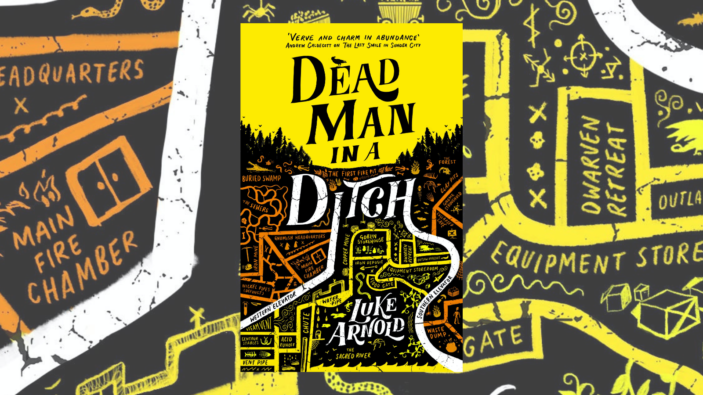 Fetch Phillips, the noirish rouge for hire from Weatherly, is back. It’s been less than year since his last case. And, it’s aftermath is still rippling through Sunder City. People have got the idea that the magic might be coming back. They’ve also got into their heads that Fetch is working to figure it all out. There’s a change coming to Sunder, but it’s not what anyone expects. An old face returns from Fetch’s past, and given that past, what’s the odds on a happy reunion?

When I finished The Last Smile In Sunder City back in February I hoped to return to the world of Fetch and co before too long. I didn’t expect that return to come quite so soon though. Especially given the year 2020 has turned into. Luckily, author Luke Arnold had been working on a follow-up before the debut had even been published.

Dead Man In A Ditch picks up Fetch’s story not long after the events of The Last Smile. Despite the outcome of that story, life hasn’t exactly improved for our erstwhile hero. He’s still finding himself doing odd jobs for less than savoury employers, and still firmly in the embrace of his many flaws. But, the events of the last book have got some people’s attention. And, when a man turns up dead, and the cause of death is seemingly magical in nature, Fetch gets the call.

With a lot of the world building taken care of in the first book, the events of Dead Man In A Ditch move at quite a brisk pace. There are fewer flashbacks, more grit, and a whole lot more explosions. We also get introduced to a whole new cast of characters, from elves to succubi, with a few disreputable humans along the way too.

As with The Last Smile In Sunder City, Arnold again engages in some subtle social commentary, this time on the dangers of easy access to guns. There’s also further exploration of the themes of redemption, accountability and rebirth. It all adds up to a compelling read. I personally found myself unwilling to step away from the novel for too long. Instead, wanting to get to bottom of its many mysteries and sub plots.

The danger with series such as these, is that it can become like those baddie of the week television shows, where the plucky hero comes up against a new evil each week, with little to no development. But, it appears Arnold is wise to that, and looks to be steering the longer narrative into a different territory. Fetch may find himself with more cases to solve, but it does look like he’s found himself tasked with a higher purpose — whether he likes it or not.

Fetch remains a wonderful central protagonist. Arnold has him lean further into the noir territory too –– gifting him a shoulder holster and fur lined brimmed hat to accompany the trench coat and various bad habits. He’s such a contradictory character, both eminently punchable (as plenty of Sunder residents will attest), and incredibly likeable. Dead Man In A Ditch also reintroduces to many of the supporting cast, whilst introducing some new favourites too.

Whilst Dead Man In A Ditch probably could be read as a stand-alone work; and whilst there’s probably enough references made to piece together the backstory, it’s best read with a knowledge of the events of the previous book. If only to get a better sense of the world and the different relationships the different characters have with Fetch, the city and each other.

Dead Man In A Ditch sees Arnold take all the best bits of his debut and build upon it. It also manages to neatly subvert expectations. Fast paced and entertaining Dead Man In A Ditch sets up Arnold and his protagonist for further adventures, and I for one am very much here for it.

Luke Arnold’s Dead Man In A Ditch is available now through Orbit/Hachette Australia. Grab your copy from Booktopia HERE.

Read our review of The Last Smile in Sunder City, the first book in the series, HERE.