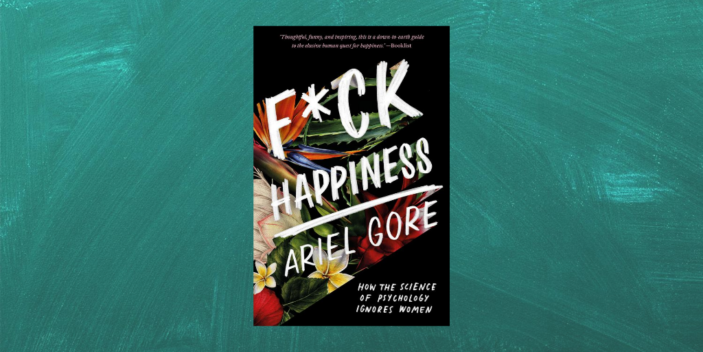 There are some people who think happiness is as easy to achieve as typing out a smiley-faced emoji. Ariel Gore knows the reality is far more complex. Her latest book, F*ck Happiness: How the Science of Psychology Ignores Women is a deep and insightful look at the positive psychology movement and where it rests in modern life.

Gore is a prolific author who has written ten books. She has actually tackled a similar subject matter before in Bluebird: Women and the New Psychology of Happiness. In F*ck Happiness, she re-examines this previous work and gives it an update, ensuring that it reflects changes in modern sensibilities.

Gore was motivated to explore this subject matter after some initial flirtations with the positive psychology movement. In this world, she uncovered scientific studies carried out by cis-gender white men. They were often considered the authority figures on the subject and they often espoused notions that women would be happier in traditional gender roles. For example some sold the idea that: having a breadwinner for a husband while a woman focused on keeping house could make you happier. Gore was rightly sceptical about this.

This work is as nuanced as Lisa Taddeo’s Three Women. Like Taddeo, Gore also interviewed hundreds of women, discovering in the process that happiness is as unique and complex as her subjects. She combined her findings with what she unveiled through her literary research. Gore also attended a positive psychology confidence and this fuelled her fierce and thoughtful prose about modern gender roles and power structures. Fans of Clementine Ford will appreciate this work.

F**k Happiness is a down-to-earth book that will provoke some readers with its brutal honesty. The book is a call-to-arms, making us challenge the notion of false happiness and smiling in order to keep people comfortable. Through Gore’s intelligent text, we are validated in our rights to experience a broad range of emotions. We can revel in the fact that happiness is not a lazy generalisation because it really does mean so many different weird and wonderful things.