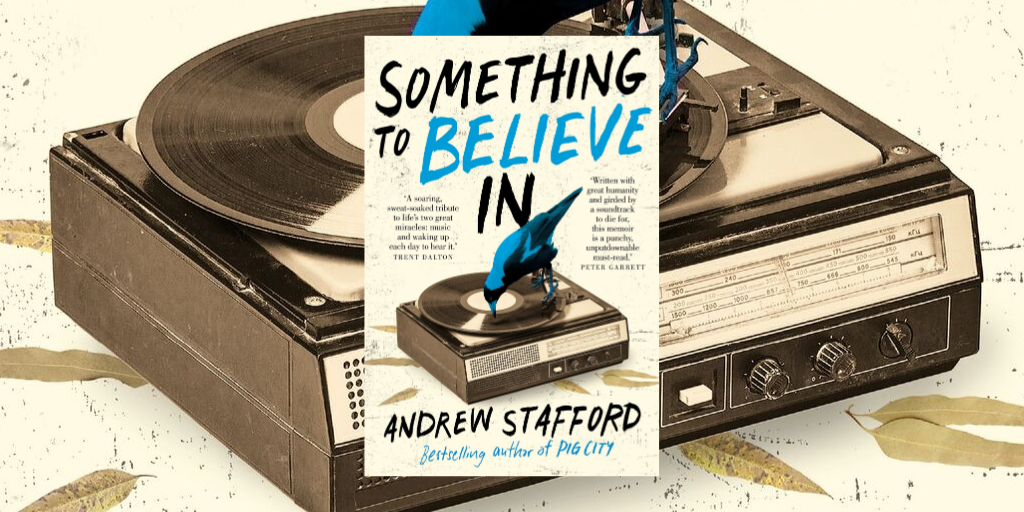 Long before The Ramones were co-opted for an ad, they were a punk band who appealed to suburbanite teens. Andrew Stafford was one such fan, which his memoir, Something to Believe In proves. Across the book’s pages he takes readers to rock ‘n’ roll high school, educating them on all matters of music and madness in one good, rollicking read.

Most readers will be familiar with Stafford’s previous book, Pig City, in which he chronicled the key players of Queensland’s music scene. This latest tome is much more personal and describes formative episodes and experiences from his life and career. At times it is a little like Cameron Crowe’s Almost Famous while at other moments it’s just like a page out of Nick Hornby’s High Fidelity. There is no question that Stafford is a music fan to his core.

Stafford has had an interesting career working as a writer, cabbie and roadie. This memoir is not your typical rock star one though. It’s not a bloated, name-dropping affair, instead, Stafford gets very real and frank about some dark things like: his suicide attempt, relationship breakdowns, and his parent’s divorce. Music was always there throughout it all and it proved a great catharsis to him. It was a panacea for this self-confessed outsider who couldn’t play an instrument so he pursued writing about it instead.

Something To Believe In is filled to the brim with interesting anecdotes. It’s also admirable to see Stafford be so vulnerable on the page. It makes for some real moments of relatability. Its pages are also full of hope, especially when we read about him hitting his stride and finding his true self. Fellow music tragics will also enjoy the curated music playlists that are offered here. These may even fuel Stafford’s next career option as a D.J. He certainly knows how to put a record on!

Andrew Stafford’s Something to Believe In is the self-described memoir of a wannabe, it’s a self-deprecating and highly readable work. This sympathetic book is for all those who felt sidelined until some great tune reached out and captured their minds. This book gives a whole new meaning to words like “Turn on” and “Tune in”.

Andrew Stafford’s Something to Believe In is available now through the University of Queensland Press (UQP).