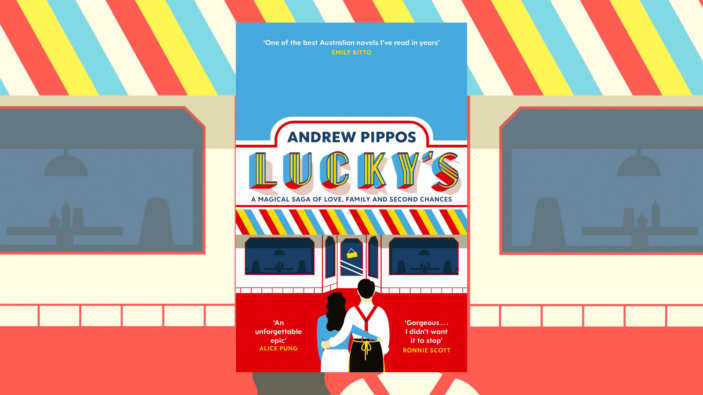 Debut author Andrew Pippos has used his own family history as a leaping off point for his first novel Lucky’s.

The multi-generational family saga details the rise and fall (and rise again?) of Lucky, a second-generation American-born Greek entrepreneur, restauranteur and erstwhile family man. Having found himself stationed in wartime Australia, impersonating clarinetist Benny Goodman to an unsuspecting Sydney audience; he becomes enamoured with Australia, and one woman in particular. With the war finished he returns to Australia and eventually becomes the unlikely founder of the fictional restaurant franchise Lucky’s. But after a honeymoon period, his luck starts to run out, and his fall from grace begins.

Whilst Lucky might be the novel’s pivotal character; he’s accompanied by a stellar supporting cast. Most notable, is Emily Main, a struggling journalist whose marriage is on the rocks, and has decamped to Australia to write a major feature on Lucky and his franchise, and to try and uncover her family’s connection to it all. There’s also a whole range of other supporting characters, some family or extended family, all with their own secrets, motivations and desires. But, not all the characters enjoy the same run of luck as others.

Lucky’s is something of an ambitious feat, especially for a debut. It’s broad in scope, ranging from the 1940s up until more or less the present day. It’s also full of interweaving and interconnected stories. Pippos handles these many dangling threads with admirable ease; leading the reader through the Lucky saga, dropping little clues and hints now and then. Perhaps, more impressively, he manages to tie up all those loose threads come the end too. That’s not always the case with these inter-generational sagas.

Lucky’s is a truly enjoyable read. It’s well paced and structured, and despite the jumping between characters and years, easy enough to follow. There’s drama and violence, passion and love, disaster and hope. It’s all you would expect from a ‘Greek Saga’. It’s also full of warmth; warmth for a particular community and for a by-gone Australian institution – a staple of the Australian high street. A novel populated with a wild cast of characters and told with great humour and warmth, you can’t go wrong by making a reservation at Lucky’s.

Andrew Pippos’s debut novel Lucky’s is out now, from Picador Australia. Grab yourself a copy from Booktopia HERE.