“History is often more remarkable than anything I could make up”: Philippa Gregory talks about the Fairmile series and her new book Dawnlands 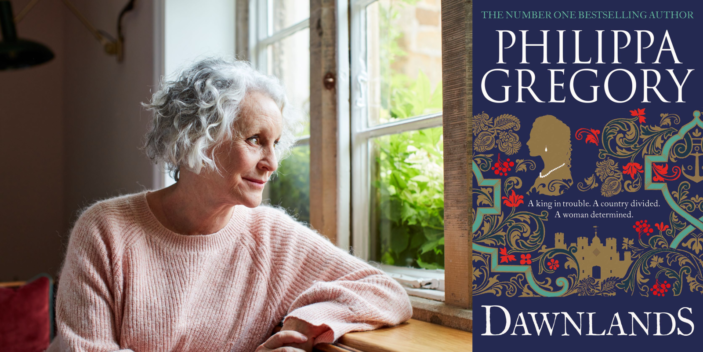 Philippa Gregory, best known for her worldwide hits The Other Boleyn Girl and The White Queen is a recognised authority on women’s history.

With a slew of awards and recognitions for her contributions to literature, including a CBE in the Queen’s Birthday Honours in 2020, her latest saga, The Fairmile Series, spans the years of 1648-1685.

The third book, Dawnlands, is out today. Philippa took time out of her busy schedule to tell us a bit about the series and her incredible career in writing history.

Thanks so much for talking with us Philippa. Maybe we can start with a recap of the series so far for our readers who maybe aren’t up to date, or for those eagerly anticipating the new release.

This series opened with Tidelands where we met Alinor Reekie and her two children Alys and Rob – a poor family living on the very edge of society in Selsey, a tiny coastal village where land turns into sea at the end of the English Civil War.

Alinor, a midwife and a herbalist, falls disastrously in love with James, a recusant Catholic priest hiding out in the home of Sir William Peachey, himself a secret royalist sympathiser. James has a plan to rescue King Charles I from his nearby imprisonment on the Isle of Wight and Alinor helps him, despite the great danger it brings her.

Alinor’s reward encourages her neighbours to suspect her of witchcraft. James fails Alinor, protecting his own reputation rather than claiming her as his lover. Though Alinor survives the terrible ordeal of a witchcraft trial by water, she is forced to flee the scandal and leave her childhood home. In the cliffhanger ending, we left Alinor and Alys, both pregnant, on the road to London.

In book two, Dark Tides, we pick up the story twenty one years after book one. Alinor and Alys are scraping a living as working women running a small wharf on the banks of the River Thames.

James, whose wealth, titles and good name were restored when King Charles II returned to the throne, has everything but an heir. He returns to the Reekie family hoping to claim the child he abandoned all those years before. Just as he is making his case, Alys receives another visitor to the warehouse – an Italian beauty named Livia – claiming to be Rob’s widow and hoping to secure an inheritance for her son by shipping her goods from Venice to sell to London’s nobility. Alinor is suspicious of Livia’s story, but Alys is dazzled by the glamorous newcomer and the new opportunities she offers.

Meanwhile, Alinor’s brother, Ned, has sailed to New England to find a new life away from the rule of the monarchy. He finds himself on the tensely contested frontier of early America, between the worlds of the incomers and the American Indians as they move toward inevitable war.

So, we come to Dawnlands at a pretty crucial moment. What can readers expect from the new book?

In book three, Dawnlands, we find England on the brink of another civil war. King Charles II has died without a legitimate heir and his brother James is to take the throne. But the people are bitterly divided and many do not welcome the new king or his young queen Mary of Modena.

Livia joins the court as a lady-in-waiting to the new queen and manipulates Alinor and Alys, securing their support and putting the Reekie family on both sides of the war. She negotiates a marriage for her son Matteo without regard for his foster family and drags the entire family into the rebellion

The Fairmile series is another feather in your cap to an epic career writing historical fiction. I’d love to know more about what drew you to historical studies in the first place?

My love of history started at university. I was very lucky that my university enforced multi-disciplinary study in the first year, so I took English Literature, History and Philosophy.

In my case, I was lucky enough to be taught the Introduction to History course by an incredible tutor, Maurice Hutt. He was a passionate historian and a brilliant teacher. From the very first seminar when he marched in and terrified everyone he was completely inspiring. I suddenly realised that history tells us everything and I switched to full-time History study as soon as I could.

I went on to do a PhD at Edinburgh University where I studied eighteenth-century novels and their world view. As I was finishing the thesis, I started writing my own novel, Wideacre, which was an immediate worldwide success.

You’ve explored lots of different time periods in your writing. What drew you to the era of King James II and the Stuart kings?

Actually, I hadn’t expected to end up back in the royal court. I started the Fairmile series as a family saga and I wanted to tell the story of an ordinary – in this case fictional – family, who in day-to-day life are often more interested in grain yields or local market prices than the monarchy.

But at the very time that I set the novel in Selsey, Charles I was imprisoned on the Isle of Wight, just over the Solent. I could not resist a rescue attempt and my characters were involved in the great sweep of history that was the coming of the Commonwealth.

In Dawnlands, I knew the arrival of an Italian Queen Consort in England would be an opportunity for Livia, and that unrest against the royal family would bring Ned, the Commonwealth soldier, home to England. He brought with him an American Indian who had been enslaved after one of the colonial wars – so there was another theme about freedom and First Nation people.

My intention was that the book would be a story about a family and their relationship to each other and to the wider world of wealth and power.

I’d love to know more about your research practices, and how you find the truths that inform the fiction.

I read! I read all of the histories and all the articles and essays referenced in the books. I also like to visit places mentioned in the novels and to visit museums and talk with local historians.

In this book in particular I met with the Pokanoket tribal elders to make sure that they were happy for me to write about a fictional Pokanoket person, and that I understood their history. Only when I have been completely immersed in the period do I feel I am ready to start writing, and then I write every day for a few hours a day.

How do you find that balance between being historically accurate and being entertaining to a modern audience, not just in terms of events and names, but also to the way people speak and engage with each other?

That’s the job of a novelist.  I don’t think it helps anyone to write inaccessible history and I took a decision when I first started writing fiction to modernize the dialogue.

In my Tudor and Plantagenet series, I used first person, present tense to help readers stand in the shoes of the characters. In this series, there is such a diverse and large cast of characters that I use a narrational voice, but (I hope) maintain a sense of immediacy so that readers are turning the page to find out what happens next.

It’s true that the history is often more remarkable than anything I could make up – this is the queen who was accused of smuggling a baby into the birthing chamber to make sure she had a son and heir!

What period of history do you think you might write about next?

I’m writing a non-fiction book on women’s history.  It’s a huge project and I’m finding it completely fascinating.  But when I have finished that I will return to this epic story of a family riding on the prosperity of the British Empire.

Dawnlands by Philippa Gregory is out now from Simon & Schuster. Get yourself a copy from Booktopia HERE.