Interview: Debut author Bronwyn Eley gives us the lowdown on her upcoming YA fantasy, Relic

With just a few short weeks until her debut YA fantasy hits bookstores, we were lucky enough to grab five minutes with Sydney author Bronwyn Eley, to chat about trilogy opener Relic, her writing process, and her ever growing TBR pile!

First things first – can you tell us a little bit about Relic and Kaylan, its wonderful lead? (No spoilers, of course!)

Relic is about a young blacksmith called Kaylan, who is selected to be the new personal servant to Lord Rennard, the powerful and menacing ruler of the city of Edriast. Rennard is in possession of a Relic, a dark and twisted magical stone that imbues the possessor with frightening powers. There are only five in existence, their origins unknown, their powers wholly unique.

Kaylan begins her new role as the Shadow – the colloquial term given to the unfortunate people selected – and knows she will soon be dead. Part of the Relic’s power is to defend its ‘owner’ from all threats. Anyone who is not part of Rennard’s bloodline is seen as a threat and slowly poisoned when in proximity to the stone. When one Shadow dies from the poisonous effects, a new Shadow is selected.

Soon after entering the castle, Kaylan discovers there is a plot to destroy all five Relics – and the bloodlines who posses them – underway. Kaylan has to decide where her loyalties lie and whether or not, being in a unique position, she will aid this rebellion to end magic.

Of course, things are never that simple! Kaylan is forced to consider what this rebellion – which she knows will bring war – will do to her family, friends and all the innocent people who would become collateral. Is this change worth what will be lost? Is the man leading the rebellion any better than Rennard?

Kaylan is the kind of person who doesn’t take any bullsh*t from anybody. She is stubbornly loyal, has zero tolerance for cheats, won’t back down from a fight and, like a lot of us, is terrified of losing control over her own life. Then she is thrust into this world of magic, pain, treason and lies, and everything begins to change!

Where did the idea come from?

Unfortunately I don’t remember the exact moment of inspiration and Relic has developed a lot over the last few years. Over the years I’ve definitely been inspired by a lot of incredible fantasy books – from Lord of the Rings by Tolkien to Poison Study by Maria V. Snyder. It’s safe to say that it’s thanks to stories like these that I found my way to what I love writing: fantasy.

What drew you to the genre?

Read it, watch it, write it – it’s definitely my favourite genre! YA fantasy, in particular, has been a great source of enjoyment and entertainment for me. YA fantasy novels are fun, fast-paced, exciting reads and I really do believe I found where I belong as a writer. I love challenging my imagination and having the freedom to let it run wild. 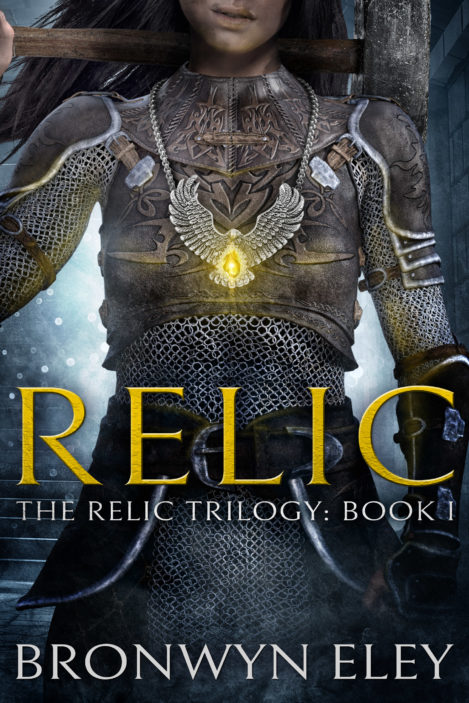 As a debut author, you’ve probably been through quite a lot of new experiences over the last few months! What’s it been like working towards Relic’s release?

A lot of what’s happened over the last few months wasn’t all too surprising and unfamiliar for me, because of my work in the book industry. I spend a lot of my time with authors and hearing their stories really opened my eyes to the realities of being an author. In saying that, there are some things you can never prepare for!

It’s been quite nerve-wracking to know that my book is out in the world being read and reviewed. It’s a strange feeling to witness people’s excitement for something that, up until recently, was mostly a private affair. It was always just me, my laptop, my music and Kaylan’s story. Even though I was writing with the goal of being published, actually being published is a complete shock to me. The fact that people want to read my book, that they are liking it and that I could potentially make a lifelong career out of this is still mind-boggling! I don’t think it will ever get old.

What’s the writing process like for you? Do you lean more towards planning and routine, or are you a furious 4am scribbler?

I am a pretty structured person. When I want something – or know I have to do something – there is little wriggle room for me. I currently have three jobs, including my authoring, and I am very strict when on deadline. I write in the evenings after work and on the weekends. When I have edits due, I break them down into easy, medium and hard changes and work through them methodically. One by one, easiest to hardest. A deadline is a deadline. A commitment is a commitment. I’m making it all sound so ominous but the bare truth of it is that I simply love it and it’s a complete pleasure to write, edit, blog… whatever is required of me!

For research, you spent a weekend learning a few tricks of the blacksmith trade – what was that like? Did you get to know Kaylan a little better through it?

It was an absolutely fantastic weekend! I’ve always had a strong interest in anything and everything medieval, including smithing, which is why I made Kaylan a blacksmith. I mostly did a lot of internet research but one day decided I needed to know more. It definitely brought me closer to Kaylan and everything I experienced that weekend actually validated what I had already written, which was a nice added bonus!

I feel closer to Kaylan and it’s important as a writer to know as much of your subject matter as possible. Now when I write about the sweat dripping over every inch of Kaylan’s body, I remember that disgusting feeling. I remember the unfathomable heat of the furnace, the aches and pains, the blisters and burns, and – most important of all – that satisfaction of completing a task, of making something with your own two hands. I can see why Kaylan would love it.

Your publishers Talem Press are all about great fantasy and fierce female leads – what’s it like to be part of the family?

It’s a complete privilege. The fact that they think my novel is great and that Kaylan is fierce and worthy of being shown to the world is such a compliment and sometimes I still pinch myself. I am so grateful to them for giving me the opportunity to prove myself a worthy author and to introduce my characters to the world. The team at Talem Press are such hard-working, passionate and friendly people – I’m very lucky to work with them.

Your other job is in social media at online bookstore Booktopia – are there any books you’re particularly excited to get stuck into yourself?

A lot of the books I’ve been excited for this year I’ve either already read or have them in my TBR pile. I’m very lucky to receive advanced copies to review for work. Some of those books have been/are Darkdawn by Jay Kristoff, The Starless Sea by Erin Morgenstern, The Ninth House by Leigh Bardugo, The Institute by Stephen King, The Harp of Kings by Juliet Marillier, The Secret Commonwealth by Philip Pullman, Angel Mage by Garth Nix, and so many more! Too many books, not enough time!

With the release a few weeks away and a couple more books to come in the series, I feel like we already know the answer to this one but what’s next for you? Any sign of a well-earned break on the horizon?

To me, no break from writing is wanted or needed! I am raring to go. I have edits for book two in The Relic Trilogy in the works, and then I will be starting book three. I also have many other story ideas I’ve been tinkering on and I’d like to pick one and start working on that too.

Relic hits bookstores on September 12th, and you can pre-order a signed copy of Relic right now on the Booktopia website! And while you wait for the postman, you can keep an eye out for updates via Bronwyn’s social media: Website | Facebook | Instagram | Twitter