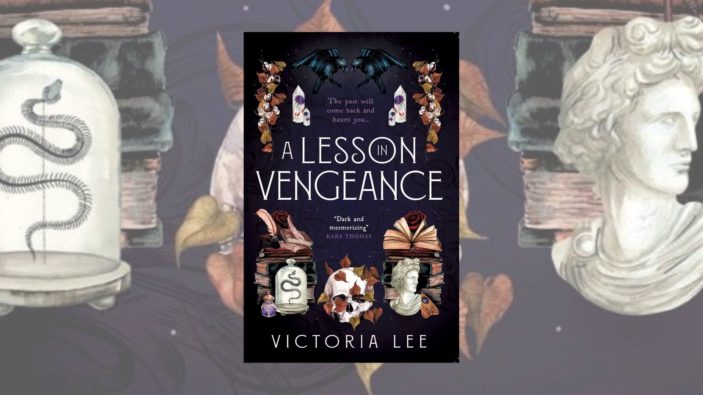 In Victoria Lee’s A Lesson in Vengeance, eighteen-year-old Felicity Morrow has returned to Godwin House; the oldest and most haunted of the student houses at Dalloway school, a girl’s academy set high in the Catskill mountains in the U.S. She has returned after a year away, a year in which she was recovering from the shock and grief of her girlfriend, Alex, dying in mysterious circumstances.

Felicity is haunted by what happened, by the sense that Alex’s ghost is following her, and by the research she did into the young women who were murdered in Godwin House after being accused of witchcraft over a hundred years ago. The deaths of the Dalloway Five are, to Felicity, inextricably linked to Alex’s death. And now that she is back at Godwin, she is determined to overcome her obsession with magic, her fascination with the Five, and the pain of Alex’s sudden passing.

But there is a new face at Godwin House this year: Ellis Haley, a wunderkind writer, who is basing her new novel on the Dalloway Five, using them to ‘interrogate the concept of the psychopath’. Felicity becomes increasingly fascinated by Ellis, who in turn is becoming fixated on the Five and what happened to them. They form an alliance, and Felicity finds herself embroiled in even more strangeness and uncertainty.

Is Alex’s death really linked to the Dalloway Five? Is Felicity losing her grip on reality, or is she really being haunted by Alex’s ghost? And can she trust Ellis, or is she just being used for literary material?

This is another slow-burning, dusty library-filled story of young people from old money, whose membership of ancient institutions and social networks shapes and chafes their lives. These young women are clever and competitive, rich and cliquey, and they spend their time at school dissecting poetry, creating covens, and memorising Sapphic literature.

In this very aesthetic setting, the tension is drawn taught between Felicity and Ellis as they engage in an ever more dangerous battle of wills, pushing each other away while simultaneously growing closer. But, as Felicity is an unreliable narrator, the events that are unfolding are imbued with a sinister uncertainty. It is never entirely clear if she is experiencing reality as everyone else is experiencing it, and with the stakes so high, she could fall off the edge… much like Alex.

Lee manages to pull off this quite serious story without taking it too seriously – a fine line to write. The literary references are present, but they do not crowd the story. Ellis and the other girls of Godwin House are painted as mostly likeable characters. But, they do not use phones or any other technology, eschewing them for notes handwritten with fountain pens. Ellis even goes so far as to draft her novel entirely on a typewriter; something which Felicity is less than impressed by. There are even several call-outs of characters doing things ‘for the aesthetic’, and that self-burn balances out the constant references to ink-stained tomes and flickering candlelight nicely.

I would recommend this book to lovers of aesthetic dark academia stories; anyone who enjoys a novel that does not have a single male character or even mention men in any way whatsoever; and to those who enjoy an untrustworthy lesbian love story. Will Felicity be betrayed, or will she betray Ellis first? Will they fall in love, or destroy each other? And, will they ever stop sharing lipstick-stained cigarettes in quaint antique stores?

Who can say, you’ll just have to read it.

Victoria Lee’s A Lesson in Vengeance is available now from Titan/NewSouth Books. Grab yourself a copy from Booktopia HERE.