Book Review: Vanessa Len’s Only a Monster is YA at its very best 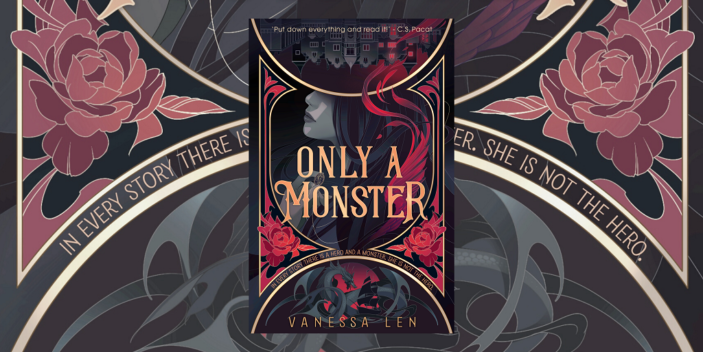 Melbourne’s Vanessa Len takes all the tropes you know and love and manages to make them feel new and exciting in her debut novel Only a Monster. This urban fantasy adventure features enemies-to-lovers romance, a hidden magical underworld, time travel, hot monster boys, and a mysterious monster king surrounded by a frightening monster court. The best part is, it’s the first book in a trilogy! How is that the best part? Because after reading it, I can promise you’re going to want more!

Joan Chang-Hunt’s grandmother has always said their family are monsters. Joan thought it was a funny quirk of her eccentric grandmother until one day, the truth is revealed, and goody-two-shoes Joan is confronted with a horrible realisation. The Hunt family are real monsters – beings that can travel through time by stealing time from regular humans.

Things only get worse when it turns out her summer crush, Nick, turns out to be the human hero destined to destroy the monsters. Now she’s on the run with the son of her family’s arch-rivals, the handsome but arrogant Aaron Oliver, in a chase through time. But Joan knows nothing of the monster world. Can she survive in a world of secrets and laws she doesn’t understand while on the run from the boy she loves?

My biggest question coming into this book was, are the monster’s really bad? Is this going to be a Maleficent (2014) situation where our villain is actually the good guy and the hero is actually bad? But no, Len manages to make you root for the monsters while questioning the morality of what they do. Even though logically, as a human myself, the concept of monsters stealing time from my life just so they can go and party in another time period is repulsive, I still felt myself rooting for Joan and Aaron as they tried to escape the monster hunt. Joan battles with this repeatedly, questioning hers and her own family’s actions as she learns more and more about the monster world. It’s a refreshing take on the monster point of view with the monsters actually being as morally ambiguous as we would expect monsters to be.

Len also finely balances mystery, world-building and the chase. Readers are slowly introduced to the mechanics of this time-travelling population and how it’s regulated; with the settings and history showing just how carefully Len has considered the implications of the power. Likewise, she slowly builds the suspense, giving just enough answers to keep you satisfied, while raising just as many new questions. By the end of the story there are still a few mysteries left unsolved which will no doubt become central themes for the trilogy.

Only a Monster is a pacey, dark, compelling read. It’s YA at its very best. The diverse ensemble of well-rounded characters will capture your heart, while the London setting will have you desperate to go exploring back streets and alleys in one of the world’s most dynamic cities. I can’t wait for the next book.

Vanessa Len’s Only a Monster is out now through Allen & Unwin. Grab yourself a copy from Booktopia HERE.