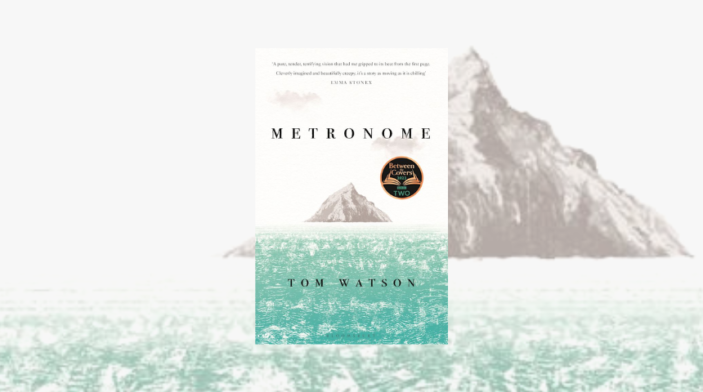 For twelve years, Aina and Whitney have lived in exile. Imprisoned on an isolated island, their lives are measured by the clock in the kitchen that dispenses the pills that keep them alive. Hobbies keep them busy while they await their release. Whitney tinkers, sculpts, maps the island. Aina does jigsaws, gardens, writes music.

But, on the day of their parole, the Warden fails to show. Instead a sheep wanders into Aina’s garden. But, sheep can’t swim. So where did it come from?

Tom Watson‘s brilliant Metronome is a gripping piece of literary fiction. Anchored by Aina as she gradually unravels the truth of their exile, it’s an eerie, dystopian tale of control, secrets, and love. Watson’s writing is spectacular, bringing to life the brooding claustrophobia of the island, and the shifting relationship between Aina and Whitney as the figures of the Warden and the life-saving clock loom over them – one conspicuous by their absence, one impossible to avoid.

Aina is a sympathetic, engaging lead, and it’s a pleasure to piece together the story alongside her. Where Whitney is convinced that the Warden is simply delayed, she isn’t so sure. And as she finds more and more to question, Metronome takes that growing unease and runs with it, crafting a permanent sense of dread that lingers even during the novel’s more touching moments. What else might Aina have missed by blithely accepting her fate and falling into comforting patterns and routines?

Chilling, well-paced, and beautifully written, Metronome is a stellar debut from Watson. Expect this one to linger long after you turn the final page.

Tom Watson’s Metronome is out now, published by Bloomsbury. Grab yourself a copy from Booktopia HERE.