Book Review: The School Teacher of Saint-Michel is an inspiring fictionalisation of real wartime resistance acts 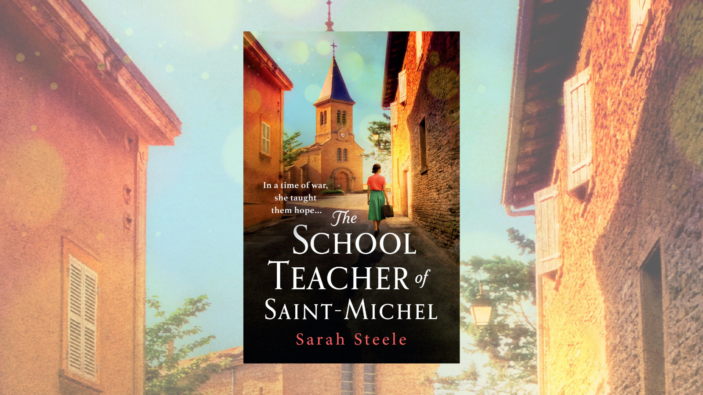 Inspired by real acts of resistance in France during the Second World War, Sarah Steele’s latest novel The School Teacher of Saint-Michel is sure to keep you turning pages long past lights out thanks to its twin timelines of two women on a mission, eighty years apart.

Hannah Stone is a teacher on the verge of burnout. Still recovering from the death of her mother and the subsequent breakdown of her relationship, she is devastated when the parent of one of her students accuses her of misconduct and she is put on leave. After all, she is just trying to stand up for a child whose father is bullying him. On top of all that, her own father has just suffered a stroke and now needs to be moved to an assisted living facility.

Just when everything seems to be getting too much to bear, Hannah discovers a letter from her late grandmother, Gigi, asking her to find someone named Lucie Laval and tell her that she is sorry. Hannah has never heard of anyone named Lucie Laval, and knows very little about her grandmother’s past, but the mystery has arrived just at the right moment. She decides to spend her leave in the village of Saint-Michel looking for answers.

Saint-Michel is a fictional village in the Dordogne which during the second World War, sat right in the path of the demarkation line. In the parts of the story set in 1942, Lucie Laval is the school teacher who every day must walk those of her pupils living on the unoccupied side of the town to the checkpoint and make sure that they make it across the bridge to their waiting parents.

Lucie is also the wife of the former mayor of the town, Gabriel, who is now a prisoner of the Germans. When she learns that Gabriel has escaped during prisoner transport, she waits to hear whether or not he is safe. But instead of sending a message, Gabriel comes to her in person with a task. Thus the Cherry Road is born, and Lucie begins her part in helping to smuggle Jewish children across the border.

She is joined by Violette, a bar owner with a violent husband who is shunned by the rest of the village for flirting with officers, and Renee, the baker’s wife who is about to have her third child. But when Gabriel delivers an older child, Miriam, for transportation, Lucie finds herself becoming attached to the girl, whom she passes off as the daughter of a friend who has been bombed out of their home. Getting attached to the child may just prove all of their undoing.

To a certain extent, this is a fairly typical World War Two story. But, if you’re the kind of reader who doesn’t roll their eyes every time another war book is published, it’s one I think you’ll quite enjoy. In the modern timeline, Hannah slowly recovers her sense of self as she befriends her landlady, Sylvie, who is the owner of Les Cerisiers, a cottage that once belonged to Lucie Laval. From Lucie, the cottage was given to Renee, who was Sylvie’s grandmother, and it now operates as a guesthouse, if a very dilapidated one.

Hannah, who needs a bit of purpose in her life, not only befriends Sylvie and her family but is soon involving them in her search for what happened to Lucie Laval, and helping them to spruce up their cottage which is failing to attract any guests. After she is given a recipe book of Renee’s, which may also have belonged to Lucie and contain a record of the trio of women’s illicit resistance activities in the form of cherry recipes, Hannah begins baking her way through the book in order to feel connected to the past.

At times, the plot does make some leaps of logic in its piecing together of the puzzle, which deny the reader the delicious moment of discovering everything for themselves or working it out on their own. But, at just over 400 pages, perhaps this is what the story needed to be. Likewise, there is a story arc involving an accident in Hannah’s past which probably did not need to be included – the trauma of her mother’s passing is enough in my mind to explain why she has closed herself off from the world. Perhaps less words could have been spent on this part of the story so that more could have been given to the solving of the mystery.

The School Teacher of Saint-Michel is a well-written and fast paced story which will appeal to those readers who enjoy the works of Kirsty Manning or Kate Furnivall. It is peopled with strong women and peppered with tales of courage which have been inspired by true events. For those who love to travel as they read, at least in a metaphorical sense, the setting is rich and will make you feel like you’ve been transported to the French countryside. It is a heartwarming and highly satisfying read, despite its slightly rushed ending.

Sarah Steele’s The School Teacher of Saint-Michel is available now from Headline Review. Grab yourself a copy from Booktopia HERE.