Book Review: Rob Wilkins’ Terry Pratchett: A Life with Footnotes is an entertaining in-depth biography of the late, great author 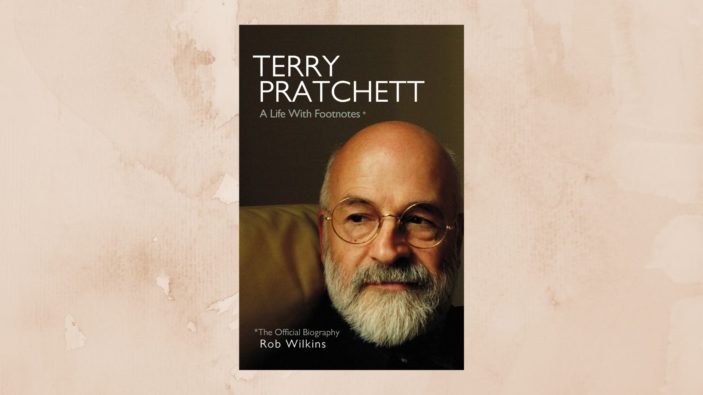 Terry Pratchett: A Life with Footnotes is the long awaited biography of the heralded fantasy author Terry Pratchett, written by his PA and close friend of several decades, Rob Wilkins. It is a captivating and in-depth account of Pratchett’s early life, family, (often reluctant) schooling, career before books, career during books, and many achievements over a lifetime of writing, imagining, and contributing an entire body of work to modern literature.

Notable entries in a long list of prolific achievements include: corresponding with JRR Tolkien as a teenager; selling the manuscript for the first Discworld novel (and the many thereafter); his collaboration with Neil Gaiman on Good Omens; being knighted by the Queen and forging his own sword; and campaigning for the right to assisted dying in the UK in the last few years of his life.

Wilkins relays all these events with the same gravity, humour, and detail as he does the smaller, everyday moments of his time with Pratchett, such as their methods for going through the mountains of fan mail received every week – “Don’t eat fan food” – and spending days in the old shepherd’s hut that Terry had restored and put on his land, where they could work for hours undisturbed.

As his personal assistant and close friend, Wilkins was present for every milestone and achievement in Pratchett’s career from when he was hired in 1998 to the author’s passing in 2015. In this book he has compiled a lifetime of memories and knowledge, and not just in his own words.

Wilkins notes in the introduction that, when Terry was diagnosed with Posterior Cortical Atrophy (a rare form of Alzheimer’s Disease), the author started making notes for what would eventually be his autobiography. Wilkins includes many of these notes, using them as framing and flavour for the events and anecdotes that he shares. This use of first-hand source material is very effective in relaying Pratchett’s own take on many aspects of his life and career and, with Wilkins’ additions and occasional fact-checking, it makes for a highly readable and enjoyable biography. As Wilkins puts it:

“It goes without saying that those words were an invaluable source for the chapters ahead… For a person who was bracingly committed to honesty and openness in his everyday dealings, Terry was also a great believer in not letting the truth stand in the way of a good story, and especially a good funny story… [However], this approach to anecdotes presents something of a challenge to the biographer… Suffice it to say that in any contentious areas in the pages that follow, I have done my best to uphold the establishable truth, while trying not to crush the indisputable entertainment value of a well-polished fact.” (pages 13-14)

Ultimately, this book is a very thorough account of Terry Pratchett’s life, works, and personality, from someone who knew him very well and for many years. Fans of his work, and fans of literary giants across the board, will enjoy not only Wilkins’ thoroughness in relaying things like bestseller milestones and early influences, but also his inclusion of the silly, funny, relatable titbits that make up a whole life… and which often includes a very well-polished fact.

Terry Pratchett: A Life with Footnotes is available now from Penguin Australia. Grab yourself a copy HERE.