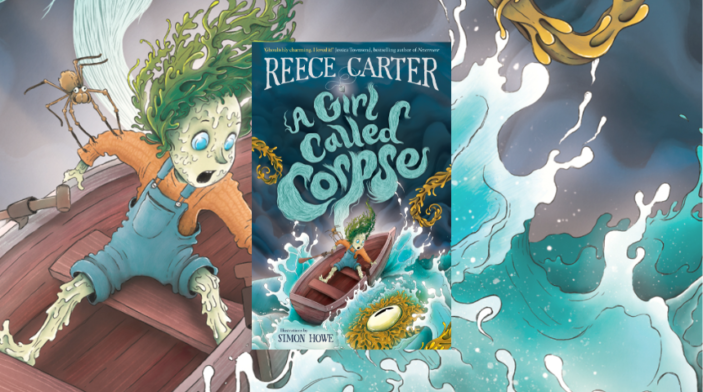 Off the coast of a tiny forgotten town called Elston-Fright, lies a rock-that-doesn’t-exist. On that rock live three wicked child-snatching children. But someone else lives there too. A ghost. She’s fashioned a body made of wax with seaweed for hair and abalone shells for eyes. She’s found a friend, a huntsman spider named Simon. And she’s given herself a name: Corpse.

Corpse has no memory of who she was before she came to the rock-that-doesn’t-exist. She must have had a family once, someone out there who misses her and wonders where she went. Someone who knows her real name. And when the ghost of an old man arrives on the rock, with a message and a mission, she might just be able to find out.

A Girl Called Corpse is the captivating series opener from Reece Carter, and it’s already garnering praise from the likes of Jessica Townsend, Karen Foxlee, and Jeremy Lachlan. Inventive, spooky, and absolutely spell-binding, it’s a fantastic slice of kidlit, and the hype for this one is sure to grow.

Suitable for middle grade readers, A Girl Called Corpse muses on the themes of friendship, found family, and loss. It’s a love letter to togetherness and teamwork, and to the power of what a kid can do when they act with their whole heart. And all that before we even get to the range of villainous foes, the myriad twists and turns, and a world that gently dips its toe into the horror genre.

Brimming with magic, Carter’s Elston-Fright Tales are going to be ones to watch. Eerie yet absolutely charming, grab a copy for your young readers (or, honestly, yourself) ahead of spooky season!

Reece Carter’s A Girl Called Corpse is out now through Allen & Unwin. Grab yourself a copy from Booktopia HERE.

It is published in the UK as The Girl, The Ghost and the Lost Name.