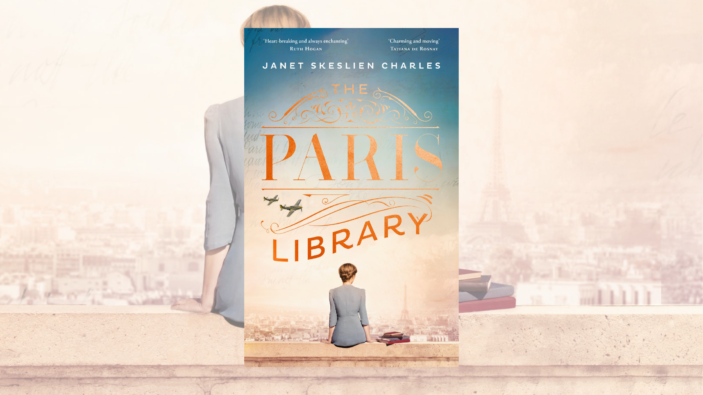 In 1939, Odile Souchet applies for a job at the American Library in Paris, having just completed her library studies degree. An avid reader, Odile is so well-suited for a job as a librarian she even thinks in Dewey Decimal subject headings sometimes. Odile is drawn to the ALP because it is the place where her beloved Aunt Caro used to take her for story time. After a family scandal sends Aunt Caro away, Odile seeks solace within the pages of her favourite books, and between the stacks of her favourite place in Paris.

She is interviewed by the inspiring Miss Reeder, the aptly named Directress. (If she hadn’t been based on a real person, I might have found this coincidence trite.) It is Miss Reeder whose courage and leadership inspires Odile and her fellow librarians to resist the Nazis as they advance on Paris, threatening the cultural life of the city as they ban ‘certain books and certain people’. In fact, many of the characters from the American Library are based on real people. Their efforts to serve their subscribers despite Nazi edicts are so impressive, I was shocked to realise more people don’t know this story already.

The actions of these brave bibliophiles make up the bulk of this beautiful novel about friendship, loyalty and integrity; but there is also a more contemporary timeline. In the 1980s, a young girl named Lily befriends the solitary Frenchwoman who lives on her street, growing closer to this neighbour and learning more of her story as Odile – yes, the very same – becomes an important presence in Lily’s life following a family tragedy. It is in recounting her story to Lily that Odile can atone for the mistakes she made in the past, and pass on an important lesson or two.

Natasha Lester describes this book as ‘utterly charming’ and she’s not wrong there. The Paris Library combines a love of literature with an inspirational tale of ordinary people standing up to fight injustice. There is a love story, a mystery, the pattern of history repeating. Fans of Lester’s own French novels will be delighted with this wartime story.

Janet Skeslien Charles‘ characters are larger than life, and she recreates Paris of the 1940s through its people both good and bad. She is a gentle and assured historical fiction writer who does not feel the need to beat her readers over the head with dense descriptions of buildings or clothing in order to evoke era. Instead, everything just feels right, from the dialogue to the attitudes, and the bits of research which have been peppered in. The authors’ own familiarity with libraries and with the American Library of Paris is abundantly clear; as is her fondness for those who use them.

My only complaint is that the book was not long enough. And, at more than four hundred pages, it is a large tome already. But, I really wasn’t prepared for Odile and Lily’s stories to end, and there wasn’t enough time devoted to the final moments of each plot line. Perhaps I am just a greedy reader but certain elements of the book’s resolution felt rushed, especially given so much care was given to the set up of the conflict and creation of the world.

The Paris Library by Janet Skeslian Charles is available now from Hachette Australia. Grab yourself a copy from Booktopia HERE.