Book Review: Nigel Marsh’s Smart, Stupid & Sixty is like a frank chat with a friend 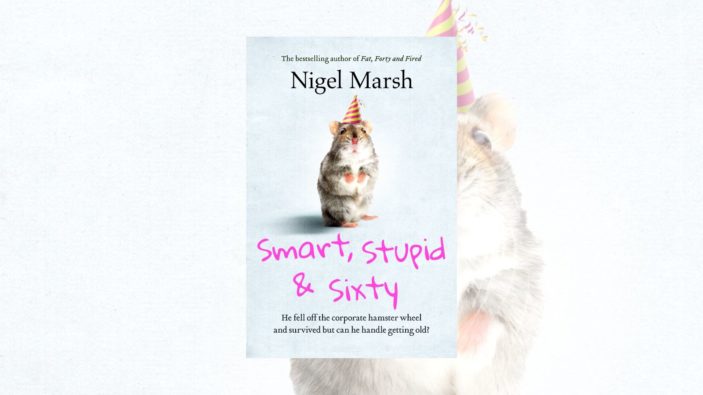 It was twenty years ago that many of us first saw author Nigel Marsh at play. Back then Marsh was the self-proclaimed “Fat, Forty & Fired” corporate type whose career had derailed. Many people could relate, so he followed up his debut with Fit, 50 & Fired Up. Another decade on, and he comes to us again with another cheeky look at life.

Marsh’s writing style is very chatty and self-deprecating. But don’t be fooled, this fella is an accomplished man too. His TEDx talk has been downloaded by the masses, he’s the co-founder of Earth Hour and he hosts a hit podcast: The 5 of My Life. Readers are treated to an unassuming style as he describes walking around in his bathrobe in a dank garage while a former mentee is now a global CEO. At least Marsh isn’t in bad company with the writing den – Roald Dahl had his own similar writer’s man cave.

In this book Marsh feels like he is either sitting on or facing a couch. In some chapters he is like a friend having a frank conversation with just you. Then in other moments he is like a therapist, offering up advice and pearls of wisdom for a good life. These will challenge you to think and have some breakthroughs of your own.

The genre of this title seems to straddle the lines between memoir, comedy, and self-help. At times, Marsh shares some similarities with David Sedaris. Both men have an excellent wit and an ability to engage their readers with anecdotes about those small slices of life. To some people this may be forgettable but these moments are often the most meaningful in the scheme of things.

So, you may be asking yourself, what does one face at sixty? Well, Marsh answers this question by looking at things like ailing parents and his children flying the coup. The pandemic is also described; but he keeps things light. Remember, this is more like a friendly conversation than a doom and gloom summing up of the global pandemic.

Smart, Stupid and Sixty is another fun read from Nigel Marsh. Once again he shares his utterly relatable life experiences with readers in a clear and clever way. Marsh has that ability to make you laugh, think and hope, which all play a vital part in a great life.

No doubt, readers will be hanging out to hear about Marsh’s next adventures in new instalments.