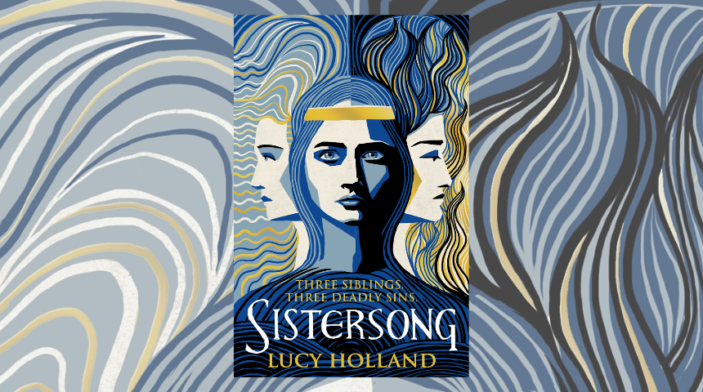 The Romans have left Britain, abandoning it to warring tribes and the invading Saxons. Already set to inherit a land torn asunder, the children of King Cador and Queen Enica watch as their parents bend increasingly to the will of Gildas, an influential and dangerous Christian leader.

Under his often cruel guidance, the people of Dunbriga are forgetting the old ways, and Riva, Keyne, and Sinne feel it keenly. Without the protection of the old gods, the kingdom’s magical defences are crumbling. And when the magician Myrdhin returns, only to be rejected by his old friend the king, the siblings must tap into their own power, to forge their own destiny and save the land they call home.

Inspired by The Twa Sisters, a traditional murder ballad dating back centuries, Lucy Holland‘s Sistersong is an exciting historical fiction fantasy. One that’s bound to appeal to fans of the likes of Circe and Ariadne.

Bouncing back from a rather unsettled opening – quickly switching chapters between the three siblings so early on, when readers just want to get a real taste for the personality of each character, is a little jarring – once characters are rather more firmly established, it’s easier to follow and to differentiate between them. In those respects, Holland has done a great job of giving Riva, Keyne, and Sinne different voices, and their more magical skillsets suit their personalities perfectly.

For Riva and Sinne, these are fairly clear from the get-go. Riva, scarred from a childhood accident, can cure others but not herself. She’s quiet and caring, but acutely aware of how unfair it is, particularly as the oldest daughter, and the one most expected to marry well.

Meanwhile, Sinne – young, flirtatious, and a little silly – toys with simple deceptions and “glamours”. Yearning for adventure and romance, the youngest daughter of Cador is all but set to attract trouble, as another power begins to unfold within her.

For Keyne who struggles against the constraint of being the daughter of a king, and – *spoiler here* – finds power in claiming his trans identity, it’s a little different. As the story unfolds, more is revealed, and Keyne boasts arguably the most compelling of the three narratives. Indeed, it feels occasionally like Riva and Sinne’s stories are rather more secondary. Which is unusual given the source material, The Twa Sisters deals with two sisters vying for the affection of the same man, here imagined as the mysterious, flame-haired Tristan, and there is little mention of a third sibling.

While I’m personally unable to speak to the accuracy or, indeed, suitability of Holland’s handling of Keyne’s identity, there’s a real beauty to the way that it’s tied so strongly to the land. It put me in mind of Alison Evans’ Euphoria Kids, and the way their gender identities and their magic are so intrinsically linked to nature and the world around them. There’s power in knowing who you are, and it’s as natural and as ancient as the mountains, the rivers, and the trees.

There’s perhaps a slightly more YA bent to Sistersong than other novels following the current trend for retelling ancient tales with a twist. But it’s no less engaging or page turning because of it – indeed, it certainly offers a really wonderful entry for younger readers to the genre. The historical elements feel authentic and well researched, and the writing is as strong and beautiful as you could hope for, and the folkloric end result is fantastic.

Lucy Holland’s Sistersong is out now though Pan Macmillan. Grab yourself a copy from Booktopia HERE.