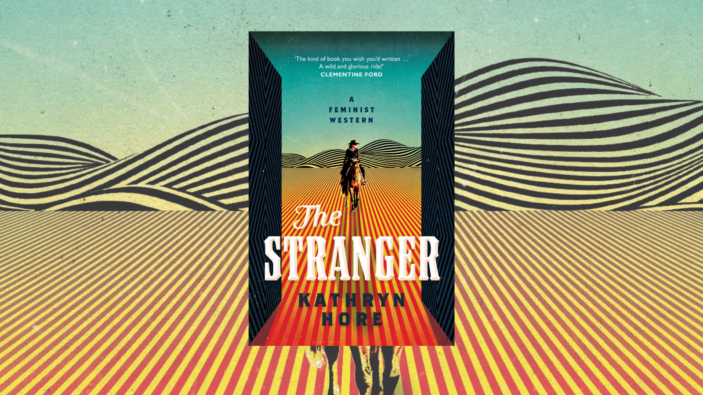 Question: What do you get if you mash up Charlotte Wood‘s The Natural Way of Things, Anna North’s Outlawed and Margaret Atwood’s The Handmaid’s Tale? Answer: Kathryn Hore’s latest novel, The Stranger.

Set in an unspecified frontier-like future on an unnamed continent, in a small, gated town called Darkwater, The Stranger is a twist on the classic story prompt, a stranger comes to town. Our protagonist is Chelsea, a sixteen year old who just happens to be the kept woman of self-appointed town leader, Granger. In Darkwater, being a woman makes her a second class citizen anyway; but her position is made even more precarious by the fact that her mother was killed by a mysterious disease.

If there’s one thing the people of Darkwater fear, it’s sickness. That’s why they live behind gates, sealing themselves off from the rest of the world, and why they submit to frequent viral screening. That’s why Chelsea’s father was forced out beyond the town boundaries to fend for himself when he developed a cough. It’s also why Chelsea’s closest friend Suse must live in a kind of quarantine away from everyone else to avoid the same fate. Granger and his crew behave the way they do to keep everyone safe from the threat of what is beyond the walls – or so they say. And the people of Darkwater have no way of knowing otherwise. So when they beat someone to death, no one dares to stop them.

When a stranger rides in to town with the usual tradespeople, Chelsea is intrigued. Not only is The Stranger a woman, but she’s very possibly a woman who has risen from the dead. A woman who dared to defy Granger. The woman who came before her. Though it means disobeying Granger and putting her security at risk, Chelsea knows that she needs to find out more about this person, and what happened in the town before she was born.

While The Stranger has echoes of other great feminist novels that came before it, and is a cracking good read, I couldn’t help but feel as if it trod on familiar ground. Like in Outlawed and The Handmaid’s Tale, society has closed in on itself due to a fear of sickness; like in The Natural Way of Things, the idea of a prison becomes something sinister and new. This novel is in many ways just as good as those, but it did not get there first, and does not have the same perspective-altering punchiness as a result.

The oppression of the town’s women as a theme is not treated in a preachy or didactic way, but neither is it as powerful as it could have been. Chelsea frequently mentions her yearning to know how to read, and references in passing her leaving school but it is never clear if her experience is the same as all girls in her society or if it is unique to her because of what happened to her parents.

Likewise the figures of Pepper, Miss Kenzie and Mother Jane, any of whom could be secret feminist icons within this town, feel unfinished. Just as the reader realises how important these figures could be, they leave the narrative again. (The three women could perhaps have functioned better if two or even all three of them were combined, particularly with the role that Mother Jane, the town healer, plays in the ending of the novel.)

Told in a braid of present day and past vignettes, Hore cleverly creates a fully realised situation that feels not only believable but entirely possible. As our narrator, Chelsea’s worldview is our window into Darkwater, and she has a voice even if she is too young to know what she needs to do with it. Right from the first page, you can hear her speaking to you, telling you about her world and what happened.

Chelsea’s is a journey of innocence to understanding, and as narrator she is both naive and too knowing (older, often than her sixteen years.) The narrative skims over the fact of her living with and conducting a sexual relationship with a fifty-one year old man, but like the townspeople, the reader is uncomfortably aware that it isn’t right. As Chelsea herself starts to realise what is actually being done to her and to the people she cares about, her rage and her desire for vengeance are projected onto the figure of The Stranger. But The Stranger isn’t there to rescue any damsels, and nor is she there for revenge. To find out what she’s actually in search of, you’ll just have to read the book.

Kathryn Hore’s The Stranger is out now through Allen & Unwin. Grab yourself a copy from Booktopia HERE.