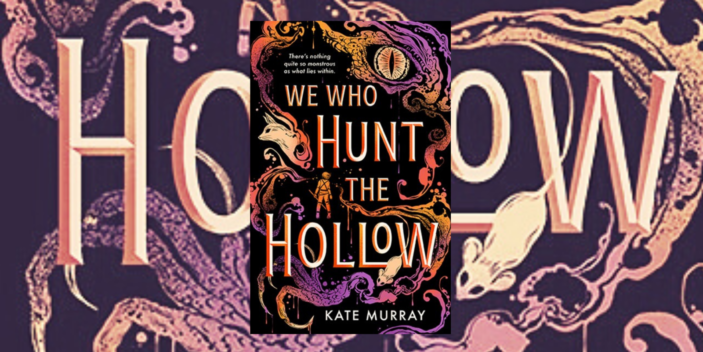 Kate Murray’s debut novel We Who Hunt the Hollow is a wholesome, angsty YA dystopian urban fantasy about who we are and who we want to be. Perfectly drawing on the awkwardness and fear of the late teenage years, Murray uses the anxiety and anticipation of becoming an adult to address issues of identity, family, love and growing up.

Priscilla Daalman is a seventeen-year-old monster hunter from a family of respected and powerful warriors. But, compared to the rest of her exceptional family, her own power is… disappointing. On top of that, her ex-girlfriend Onyeka, who left to pursue a career overseas, is back in town and its opening old wounds. And, a group of Renegade hollow hunters are on the loose stirring up dissent in the ranks too.

Plagued by the belief that she is not good enough to be a Daalman and desperate to fit in, Priscilla attempts to trigger a new power that will make her worthy of her family name. But, now she’s summoning monsters and if her family find out what she can do they may cast her out and take away her power, and, more importantly, her familiar. At least this new guy seems to like her for who she is. But what is he hiding? And what good is a monster hunter who summons monsters?

First of all, it’s so refreshing to see a YA novel where the parents (and the rest of the family) are alive, present and supportive. Murray makes it clear throughout the story that Priscilla’s feelings of inferiority are not necessarily down to the way her family treats her, so much as they way she sees herself in comparison to them. Her mothers, grandmother, sisters and nieces, along with their partners, familiars and the three imps that live with them, are a genuinely supportive and caring family. Establishing this family relationship is at the heart of the story; and while it takes some time for the action to really start moving as a result of it, it’s worth it.

This is also an incredibly realistic depiction of anxiety; showing how seemingly small events can snowball in a person’s mind so that to them the outcomes they imagine seem rational, even though others would say they’re catastrophizing. For Priscilla, whose family is such a significant factor in her life, the thought of not belonging with them, letting them down, or hurting them in any way, is a genuinely terrifying concept. Therefore each ‘mistake’ she makes compounds, and adds to an ever-growing list of reasons she may lose them. It does mean at times it can feel like the story is very emotion-heavy or even slightly repetitive as Priscilla falls back into destructive habits of thinking. But, it’s realistic and the pace keeps you racing through so it never feels like it drags.

Filled with kick-ass warrior women, shady renegades, sassy familiars and terrifying monsters, We Who Hunt the Hollow is a hell of a ride. The world-building is rich and interesting, the characters are fully-fleshed, Priscilla’s character development is spot-on, and the plot was not without its tear-inducing moments. I can’t wait for more installments in this world. If you are a fan of Philip Pullman’s His Dark Materials series or Vanessa Len’s Only a Monster, you’ll love this.

We Who Hunt the Hollow by Kate Murray is out now from Hardie Grant. Grab yourself a copy from Booktopia HERE.