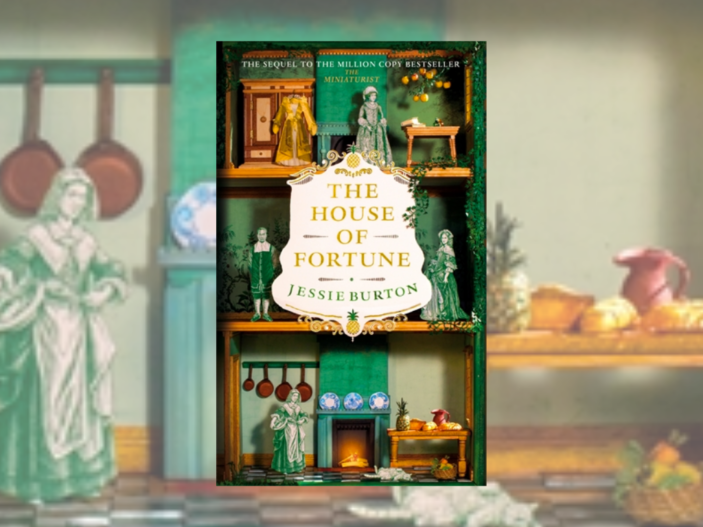 It’s not often that a sequel to a beloved novel lives up to its predecessor. Particularly, as is the case with Jessie Burton’s latest novel, The House of Fortune, when there was never a sequel promised in the first place.

When The Miniaturist was published in 2014 (and became a million copy bestseller), there was never any whisper that there might be another book to come. Our heroine, Nella, was lost to us readers as we closed the pages, and though we might have wished for a happier ending for her, we did not expect to be privy to what might happen next.

Now, eight years later, we have The House of Fortune. If you have not yet read The Miniaturist, I suggest that you close your browser now and head straight to the nearest bookshop or library. Do not come back until you’ve finished it, because in order to discuss Burton’s latest book I may have to divulge a few spoilers.

The House of Fortune opens in 1705, eighteen years after the events of The Miniaturist. It is the day of Thea Brandt’s eighteenth birthday, as well as the anniversary of the death of her mother, Marin. Thea’s family have gathered for their traditional birthday picnic – her father, Otto, who is a freed slave and now owns a grand house on the Herengrecht that was left to him by his former employer; her aunt, Nella, whose husband was drowned after being convicted as a sodomite; and her former nursemaid, Cornelia, who believes that most things in life can be solved with food.

Thea’s family love her, but they are also slowly suffocating her as they try to protect her from the realities of grown up life in 18th Century Amsterdam. Chief among their worries is that though they live in the grandest house in the city, they hardly have enough money to eat.

Thea escapes from family life by going to the theatre, where she has been befriended by talented actress Rebecca Bosman. She’s also made another friend behind the scenes. Walter Riebeeck is a set painter, and Thea is hopelessly in love with him. She believes that she is old enough to know her own mind and heart, and to make her own decisions. But on the day of her eighteenth birthday, when her Aunt Nella announces that they are to go to a society party which is a well-known occasion for making eligible marriages, everything begins to go wrong.

As was the case with the first novel, the sights, sounds, smells and tastes of 18th century Amsterdam are on full display in The House of Fortune. In particular, reading this book is likely to give you a craving for pineapple, as the craze for tropical fruits sweeps Europe. The playhouse is the most vivid of the settings used, however, and hints at Burton’s background as an actress.

For those who fell in love with Nella Oortman in the first book, you may be disappointed to see what time has done to her. The trauma of her own eighteenth year has left a shadow on the widow Brandt, who now finds herself cast into the role of anxious, meddling aunt. We learn more about Nella’s childhood and the circumstances that saw her bartered to Johannes Brandt as a bride, and experience the psychological impact that this has had on the now thirty-six-year-old. Nella has never remarried in the interceding years, and has never wanted to return home to her ancestral land of Assendelft, though we learn that she has inherited it. Instead, she has chosen to stay with Otto, Thea and Cornelia, in a city full of ghosts.

The novel is told in third person, but alternates between the points of view of Nella and of Thea, and it is interesting to see the differences between how the two women see themselves and each other. Thea is a strong and very likeable main character, less timid than her aunt was in the first novel, and far more worldly. When both women brush up against a familiar, slightly magical figure, they begin to sense that their futures are not wholly their own – although, like the character of Bruno in Disney’s Encanto, it’s likely that the miniaturist only sees the future and doesn’t actually bring about misfortune.

The House of Fortune is a worthy successor to The Miniaturist, though it doesn’t surpass it.  I wouldn’t recommend reading this new novel in isolation. Themes of women making their own destinies are built on from the first novel, and Burton once again brings the Dutch Golden Age to life. Read it if you’re a Burton fan or if you love female-led historical fiction.

The House of Fortune by Jessie Burton is out now from Pan Macmillan Australia. Pre-order yourself a copy from Booktopia HERE.