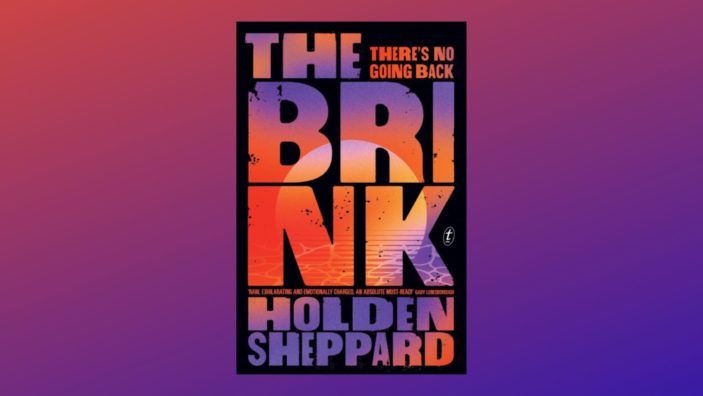 Holden Sheppard‘s sophomore novel The Brink is a tension-filled, hormone-fuelled, no-holds-barred deep dive into a group of teenagers experiencing their first week of freedom from parents, teachers, and society.

It’s told from the alternating perspectives of three of the group – Leonardo, Kaiya, and Mason – a car-load of WA school leavers who end up in a remote beachside location for their end of school party week. Each of them have something to prove and secrets to hide. They have shackles that bind them, scores to settle, and dead weight to throw off. And, this week, it’s all gonna go down. But, their week of freedom won’t be anything like what they expected. Instead, they will all be tested beyond their wildest dreams, thrown into their worst nightmares; and afterwards, they will never be the same.

The tension through this book is utterly palpable. An adult that Kaiya has a brief conversation with refers to the boys of their group as “powder kegs, likely to blow at any moment”. That sentiment could really be used to describe the whole group, in fact, the whole situation.

From taking reckless risks on the road with a car full of friends, to inviting older men to party with them on the beach, to getting on four-wheelers and jet skis while drunk, everything these characters do on this trip is a breath away from disaster. And, aside from the physical danger, the group itself is highly unstable, with couples fighting and breaking up, friendships ending over misunderstandings and poor judgement, and a general contempt for anything seen as weak or uncool.

The sense of danger is visceral from the first page. The vulnerabilities of each character like an animal’s soft underbelly, are often moments away from being exposed and ripped open. This tension only escalates through the story, reaching a fever pitch when the worst does happen. And, then suddenly they are a group of almost-children, stranded and isolated, far from help or support, with only the tattered remains of their friendships to keep them alive.

Above all else, Sheppard’s characterisation is on point. Leonardo is at the bottom of the social ladder, rejected by the prom king who, prior to highschool, was his best mate. He has panic attacks, he’s awkward and clumsy, and no one hides the fact that they don’t like or respect him. But, this week is his chance to break loose, lose his old self, and become the man he’s always wanted to be. Kaiya is looking to lose control, to own herself and her future by throwing off the expectations of her parents. She wants to get drunk, hook up, and be the bad girl that her parents are terrified of her becoming, like her wayward older sister.

Finally, Mason is hiding from his sexuality. He’s in love with his best mate but unable to do anything about it. This week is his chance to get closer, to push the boundaries, to find out what is really possible between two drunken guys on a midnight beach. These three go into the party week as teenagers leaving highschool, but they’ll leave it completely changed, in ways they couldn’t even imagine.

Sheppard has absolutely nailed this story. As someone who did leavers with a group of friends in a beach shack basically where the fictional Brink community is located, reading this had an extra kick to it. Not only is the wild, pristine coastline of that area perfectly rendered as the setting of The Brink; but all the colloquialisms, unspoken social rules, taboos, and traditions of a group of Western Australian adolescents are absolutely spot-on.

This book is totally immersive, the characters so alive and throbbing and real that you’ll feel yourself invested in their arcs from their first chapters. And, if you’ve ever been a teenager, the cringe is so real. The put-downs, the performative friendships, the fairweather friends, the manipulation, and the casual cruelty, racism, sexism, and homophobia are so visceral you want to read it with one eye open, flushed with secondhand embarrassment.

The Brink by Holden Sheppard is available now from Text Publishing. Grab yourself a copy from Booktopia HERE.

You can also read our interview with Holden Sheppard HERE.