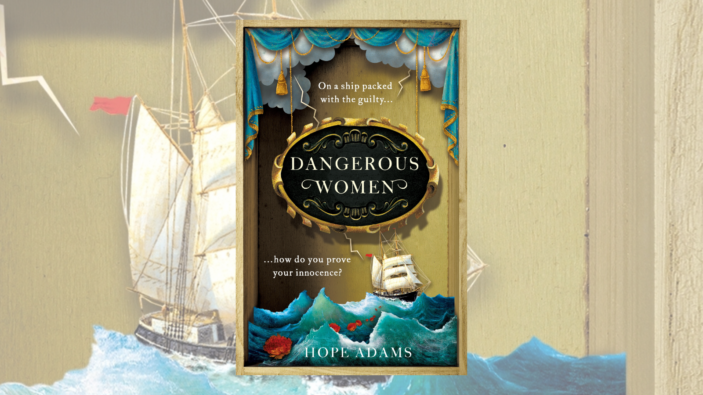 Dangerous Women may be the first novel published under the name Hope Adams, but it’s not in actual fact the author’s first book. Rather, Hope Adams is a pseudonym adopted by the well-established author (and mother of bestselling crime writer Sophie Hannah), Adele Geras. Geras has made no secret of her true identity, unlike like other well-known authors who have written under pseudonyms.

Inspired by a viewing of the Rajah quilt in 2009, Dangerous Women is largely based on a true story, but with a significant number of departures from the facts. In March 1841, a ship called the Rajah set sail for Van Diemen’s Land (Tasmania), transporting some two hundred female convicts from various prisons around England, Scotland and Wales. Also on board was Miss Kezia Hayter, cousin to the Queen’s portraitist and a member of a group of well-to-do women committed to the ‘betterment’ of those less fortunate, namely women who have found themselves incarcerated and transported.

Though only 23, Kezia is appointed Matron aboard the Rajah and is in charge of the moral wellbeing of the women imprisoned aboard. She devises a plan that those among the prisoners who wish to take part and who show promise with a needle and thread will join her in creating an ambitious patchwork quilt to be presented to Governor and Lady Franklin upon their arrival in Australia. However, when one of the group is stabbed to death by persons unknown, Kezia becomes part of an investigation to uncover who the killer may be. Though most aboard the ship are guilty, one, it seems, may be more guilty than the rest.

Told in alternating points of view and from two timelines (‘Now’, during the investigation of the crime, and ‘Then’, in the lead up to it), Dangerous Women attempts to blend the historical genre with that of the locked room mystery. The first narrator is Kezia, though her sections are told from a third person limited point of view. Meanwhile the other two points of view are told in first person. As Kezia was a real person, and the two prisoners are invented, this gives the impression of witnessing history as it may have happened. It is the first person narratives which are the most compelling. They build a sense of not only how it feels to be aboard a convict ship, but also to the circumstances for the women that led them to commit their crimes.

One of these points of view is that of Hattie, but as she is the member of the group who is stabbed, she therefore only appears in the ‘Then’ portions of the book. The other voice is that of Clara, a woman who has committed a far worse crime than any of the others and has, unbeknownst to all of the other passengers, taken the place of another woman to get aboard the Rajah and avoid being hanged. Naturally, she is the most likely suspect for the murder.

There are a number of questions at play then, which drive the plot forward: who has killed Hattie, and why? and which passenger is actually Clara? For most of the book, it seemed clear that the answer to each question would be left until the end. But halfway through the novel, Clara seemingly to reveals her new identity (and contradicts a number of different sections earlier on where she has referred to this person in third person), spoiling this portion of the mystery. Up until that point, I was really enjoying trying to work out which woman she was, but it seems the author never intended for that to be part of the puzzle.

Clara reveals details of her former crimes, and her possible connection to Hattie, but I found these pieces too complicated and confusing to add up. It was clear that the novel was striving for an Alias Grace or Burial Rites type of narrative for Clara – a woman who has done evil but was forced to it by the actions of men and society giving her no other choice – but the lack of clarity made it hard to follow.

Likewise, Miss Hayter seems to feel sympathy for her charges, certain in her belief that most of them have only done what they were convicted of to escape or please vicious husbands. This kind of tendency to over-explain the themes of the book crops up a few times throughout the narrative. Nowhere is it more obvious than in a section towards the end when Clara finds herself reflecting that the bonds forged between the women during the voyage is much like the creation of the quilt itself.

The book is interesting and for the most part, compelling, but left me with a lingering sense of wanting more. More research, more depth, more clarity, more atmosphere, more of a puzzle. Though there were a number of twists in the solving of the murder to keep the reader guessing, the solution was, all in all, quite easy to guess.

Although Kezia Hayter and the quilt were real, the women aboard the ship have all been given invented names and stories. The central plot, the murder, is an invention too as the real convict women have descendants still living in Australia today. I found myself wondering why the Rajah and its quilt couldn’t have stood as the basis for another imagined ship and sewing project; instead it was a confusing blend of a little truth, and a story which never happened.

Dangerous Women by Hope Adams is out now, from Penguin Australia. Grab yourself a copy from Booktopia HERE.