Book Review: The past, present and future are more alike than you think in Emily St. John Mandel’s Sea of Tranquility 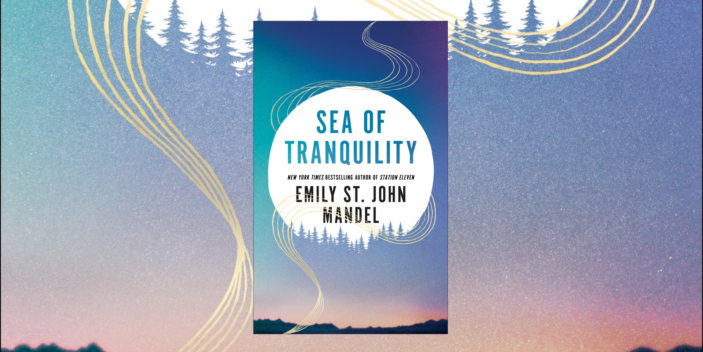 The new novel from award-winning author Emily St. John Mandel traverses time and space to tell a multifaceted story of love, endurance, human nature and reality. Sea of Tranquility is set within the same universe as her previous novels Station Eleven and The Glass Hotel offering fans of her earlier works plenty of ‘a-ha’ moments. But, new readers will also be able to follow along with no problem, enjoying a story that is in itself contained and beautifully written.

Set between 1912 and 2401, Sea of Tranquility jumps back and forth through time following multiple people and their links to a strange anomaly. In 1912 and 1994, Edwin St John St Andrew and Vincent Smith respectively stand beneath a maple tree in the forest around Caiette (a fictional village in British Columbia) and experience a moment of darkness with the sound of violin music and a strange whooshing noise. Edwin then meets a strange man claiming to be a priest but something’s not quite right about him. Vincent catches the moment on video. Years later, in 2020, her friend Mirella sees the video and ends up speaking to a man whose face is strangely familiar from her youth.

In 2203, Olive Llewellyn from Colony Two on the moon arrives on Earth for a book tour amidst the beginnings of what will become a major pandemic. In her book is an auto-fictional passage about walking through an airship terminal, listening to a violinist, and suddenly having the impression of being beneath a giant maple tree. In 2401, Gaspery-Jacques Roberts is talking to his sister at the Time Institute about their dying mother’s research on the simulation hypothesis: the theory that what we experience as reality is actually a virtual simulation.

Mandel’s writing is strikingly beautiful, filled with poetic and thoughtful lines, without being difficult or slow to read. Each word and detail is carefully picked to keep the story moving at an enjoyable pace while leaving as deep an impression as possible. It’s about halfway through the book before the separate threads start to truly intertwine and from there the story almost plummets forth with twists and turns to keep you questioning what will happen. For fans of Mandel’s earlier works, you’ll recognise references to Jonathan Alkaitis from The Lola Quartet, the fictional flu of Station Eleven, and Vincent Smith and Mirella Kessler from The Glass Hotel.

Throughout each of the various timelines is a commentary on major social issues including colonisation, class, bureaucracy and, unsurprisingly pandemics. Admittedly I would have thought that reading about a pandemic while we’re still in the midst of one would have been off-putting and yet there was such a sense of reality that went along with it. There was also a notion of hope intertwined in the commentary that made it feel like a gentle acknowledgement of what we’d been through rather than a sledgehammer reminder. The idea that humanity persists, that families persist, that individuals persist, even as we acknowledge all that has been lost.

The overarching question of reality also holds new weight in a pandemic world where our individual realities have shifted so drastically. The change in behaviours, in processes, in livelihoods… the ways in which we interact with each other and with the world. It’s unsurprising then that Mandel would choose to tease at this concept of reality, of what makes it real and worthwhile. To weave Gaspery’s explorations of simulation theory in with Olive’s experiences of the pandemic feels like a perfect match.

Sea of Tranquility is a beautiful and gentle yet absorbing read with themes that are likely to appeal to fans of The Matrix, Westworld and Cloud Atlas. The extension of her own literary universe at once makes the world feel whole even as it questions its own reality. It offers opportunities for new fans to go back and interact with her previous works while simultaneously welcoming old fans back into the world. Emily St. John Mandel has proven once again why her work is such a hit.

Sea of Tranquility by Emily St. John Mandel is out now from Pan Macmillan Australia. Grab yourself a copy from Booktopia HERE.