Book Review: Eliza Henry-Jones’ Salt and Skin is a perfect mix of witchy vibes and eco-fiction 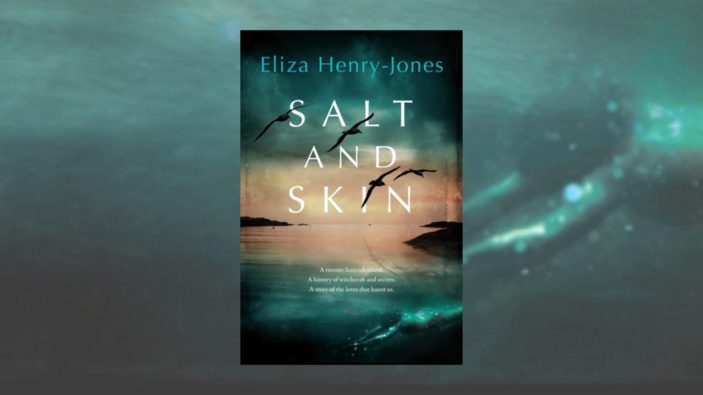 If it’s seemed this year like Ultimo Press are the ones to watch, then this latest novel by Eliza Henry-Jones is no exception. Pick it up for its gorgeous, moody cover, but stay for the complex and well thought-out plot and its cast of intriguing characters who almost seem to walk off the page.

Salt and Skin, Henry-Jones’ third novel for adults, is the story of the Managan family. Driven off the family farm in Australia by drought and tragedy, Luda and her children, Darcy and Min, move to the island of Seannay in the Orkneys. Luda has been hired to use her skills as a photographer to document the effects of the climate crisis on this remote part of the world.

The island has a history of witchcraft trials, including a recurring story about a number of women who were executed for luring whales onto the beaches to die. Legend has it that some who travel to Seannay can see the ghosts of old scars on peoples’ skin while they are on this island, but only if they’ve been hurt themselves.

Arriving on the island, Luda, Darcy, Min and a local boatsman named Ewan witness a fatal accident. Luda – who has a history of photographing the pain of others without concern for the humanity of her subjects – captures the grief of a mother in the aftermath, leading the newcomers to be shunned and mistrusted by most of those in the close knit community of islanders. There are those who welcome them though; among them an elderly relative named Cass and a young boy named Theo who was found washed up on the beach and who may or may not be a selkie.

As each of the family members become more and more wrapped up in the history of the island, and concerned about its future, a powerful story emerges on the page about the ways that old traumas can reverberate through the years, and how places can change a person forever.

Reminiscent in tone of novels like Kiran Millwood-Hargraves’ The Mercies and Robyn Mundy’s Cold Coast, Salt Skin is a book which has an eerie way of getting under the reader’s skin. Henry-Jones is gentle in her approach to both the supernatural elements of the story and her political themes. Nothing is over-explained, but rather we are shown the world as it is and allowed to make our own interpretations. The events hold their own importance, without becoming weighed down with too much symbolism.

On paper, explaining all of the things that are going on in this book – feminism, the processing of trauma, climate change, grief, the exploration of sexuality, magic, bullying, violence, domestic abuse – makes it sound like Salt and Skin should be a depressing and overly didactic novel. But, this is not the case at all. It is gentle and compelling. It is surprising and original. It is that rare thing – something new that the reader didn’t expect, and didn’t know that they needed.

Peopled with memorable characters and imbued with a real sense of community, the true strength of the novel comes from its characterisation. The friendship between Cass and Iris which is both close and deeply antagonistic. The sinister nature of Father Lee, who is the spiritual leader of the island and yet brings with him darkness and hurt. The love and frustration which exists between Min and Darcy as they are both united by their family bond and pulled apart by how differently they approach the world. Likewise, the setting of the island of Seannay, and the house where the Managans live, almost function as characters within the book and loom large over everything that happens.

If you’re looking for a compelling read with moody vibes that will make you think, then this is the one to pick up next.

Salt and Skin by Eliza Henry-Jones is out now from Ultimo Press. Get yourself a copy from Booktopia HERE.