Book Review: Diana Reid’s Love and Virtue is a triumph for new kids on the block, Ultimo Press 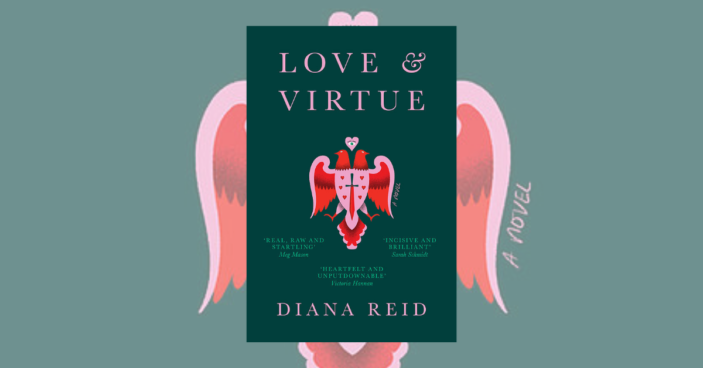 Diana Reid was well on her way to a career in theatre, when COVID-19 saw the cancellation of 1984! The Musical, a production she co-wrote and produced. In lockdown, she decided to turn her hand to writing a book. The result is Love & Virtue, a masterpiece of ‘millennial fiction’ which is already garnering comparisons to Sally Rooney.

The novel follows a young woman named Michaela who has moved from Canberra to Sydney to attend University. She has received a scholarship to live in Fairfax College; there she meets the enigmatic and highly opinionated Eve, who lives in the room next door to hers.

Eve is staunchly feminist, and has a personality which polarises her peers. While Michaela feels both drawn to her and intimidated by her, Eve is not a part of her ‘circle of friends’, rather she is someone she hangs out with separately. The nuances of their relationship, which is part attraction and part rivalry are explored throughout a number of incidents, with Michaela often forming her opinion on things in relation to Eve’s.

Eve is shown to be highly manipulative and her identity seems to be a kind of performance at times, such as when she returns from a trip to Europe with a shaved head, as if rejecting her beauty and privilege just to be obstinate.

Two key events drive the conflict between Eve and Michaela. The first is the revelation that one of their circle of friends is revealed to be the young man who slept with Michaela on her first night at Fairfax, when she was too drunk to consent. While Michaela feels uncomfortable about the event, Eve is militant in her insistence that his actions constituted a rape and that Michaela needs to report him to the school. Things are made complicated by the fact that this young man is now dating one of Michaela’s friends.

The other event is the beginning of a relationship between Michaela and her philosophy professor, who is twice her age. While this man is rumoured to have a history of innappropriate relationships with his students, Michaela feels that this is different because she is the one who pursued him. She derives a sense of confidence from the fact that Paul is attracted to her, when he met her in a class that also contained Eve. The reader is left to draw their own conclusions as to whether this might be the reason she is interested in the transgression in the first place.

Set against a backdrop of philosophy classes, and released into a post Me-Too world, Love & Virtue takes well-trodden ground and dissects it. Is the cliched plot of the jaded middle aged professor taking advantage of his impressionable undergrad love interest really as simple as television and movies have led us to believe, or is there more to be explored here? Reid cleverly pairs this aspect of the plot with the exploration of friendships in early adolescence, putting the focus not just on what Michaela and Paul are doing, but on Michaela and Eve’s relationship, ever present in the background.

Michaela may be a deeply flawed narrator, but she is also extremely easy to relate to, as she feels out of place in the new environment in which she finds herself. She is not the prettiest, not the smartest, not the coolest, but she is also not the kind of insufferable character who believes she is ugly, stupid and a loser until someone else shows her otherwise. She owns a lot of her bad behaviour, even if it’s just to herself, which cleverly keeps the book’s tag line (Are you a good person, or do you just look like one?) in the forefront of the reader’s mind.

I think the Rooney comparison is warranted. Reid’s writing has a breathtaking clarity. Her writing is sparse with adjectives, but still manages to be evocative. There is also a wryness to the voice, which seems to come from Michaela, and lends to the idea that perhaps she thinks she is more ‘special’ than she is letting on. At times, the book reminded me of the experience of reading Meg Mason’s Sorrow and Bliss. But, put quite simply, Love & Virtue is a triumph.

Love & Virtue is available now through Ultimo Press. Grab yourself a copy from Booktopia HERE.