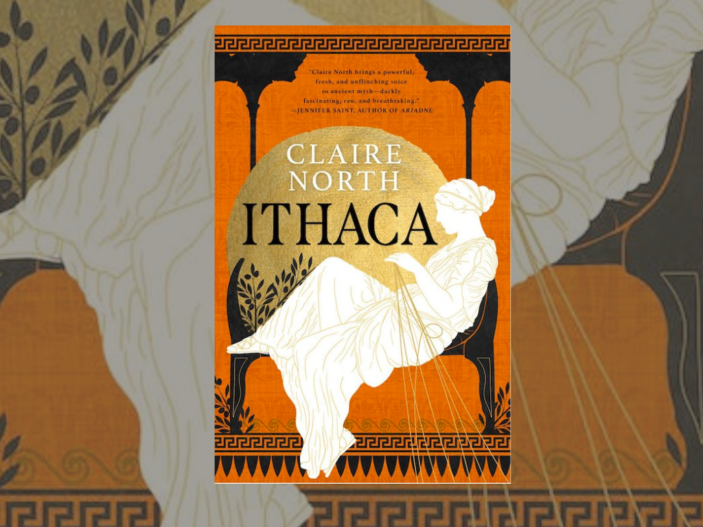 It’s no secret that Greek Mythology retellings are having something of a moment. Madeline Miller‘s The Song of Achilles – published in 2011 – was one of the most talked about books on TikTok this year; and in the last couple of years, we’ve had novels which focus on the forgotten women’s perspectives within these mythologies from writers like Pat Barker, Natalie Haynes, Jennifer Saint, and now, Claire North.

North, a pseudonym for British fantasy writer Catherine Webb, has previously published a number of science fiction novels such as The First Fifteen Lives of Harry August. Now, she has begun a new series entitled The Songs of Penelope, beginning with Ithaca which was released earlier this year.

Ithaca is about Penelope, the wife of Odysseus, who has waited on the eponymous island for her husband to return from the Trojan War for something like eighteen years. She is Queen of Ithaca, but she is not really the ruler of the island. Nor is her son, Telemachus, the ruler while his mother still lives. Ithaca is an island of women, young boys and old men; all the eligible men having sailed to Troy in pursuit of Helen alongside Odysseus.

Everyone says that Odysseus is surely dead and that Penelope must choose a new husband to become king, but Penelope is faithful and wants to wait. She tells her palace full of potential suitors (most of them young upstarts), that she will make her choice of husband when she has finished weaving a funeral shroud for her father-in-law, Laertes (whom Odysseus convinced to abdicate so that he could be king).

When pirates begin to attack the island, Penelope must act in order to protect her husband’s birthright and his people, but what can she do as a woman, when to be a powerful woman in Greece is to make yourself a target?

Despite the action and adventure aspects of its plot Ithaca is a slow and contemplative retelling. North employs the device of having the story narrated by Hera, mother of the gods, allowing her to be all seeing and all-knowing, and see into the hearts and minds of many characters. While Hera herself has a smart and sympathetic character which develops throughout the book, the story’s main focus is Penelope, a woman whom I felt I never really got to know throughout the book. In keeping herself guarded from those around her, she also keeps herself hidden from the reader. Her anguish as a mother at watching her son grow into a man and begin to realise that he must distance himself from her should have been a heartbreaking thing to watch, but it felt almost scientific at times.

That is not to say that Ithaca is not compelling reading. There is clever plotting at the heart of this book which is fitting given that Penelope and Odysseus were known for their wits.

If you are looking for a kick-ass feminist retelling, then look elsewhere – that’s not really Penelope’s style anyway as she is more given to quiet wisdom and working the system from the inside rather than busting it open from without. This would be a great read for anyone who loves mythology and wants to delve deeper into the world of The Odyssey.

Claire North’s Ithaca is available now through Hachette Australia. Grab yourself a copy from Booktopia HERE.