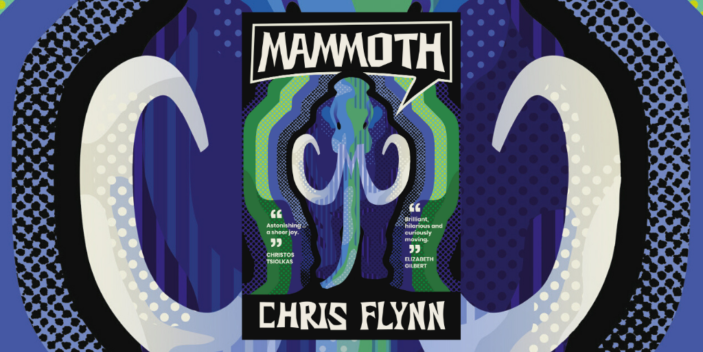 Mammoth, the new novel from author Chris Flynn, is a witty and compelling mash-up of historical and science fiction, with gags and subtle ecological (and more) messaging nestled side by side.

On the face of it, Mammoth, sounds bold, audacious and something that shouldn’t really work. A sentient Mammoth fossil tells his life (and after life) story to a roomful full of fellow fossils and artefacts. And yet, it really does. Think Ice Age or Night At The Museum, but with more adult humour and an even snarkier lead protagonist. Mammut, is everything I could want from a centuries old fossil. Complete with an axe to grind, a story to tell, and a much dulled sense of urgency in that retelling, he’s the perfect narrator.

Along with Mammut, there’s an assorted cast of supporting characters – human, fossil and otherwise. Some of them are even real historical figures.  Most of these serve the narrative, either to nudge the story along, or to inject humour (occasionally crass) into the mix. In some cases they allow Flynn to explore different subplots or themes. Real life characters Moses Williams and Georges Cuvier allow for an exploration and repudiation of the barely concealed racism in the early stages of naturalism and natural history. And though Caiomhe O’Neill is fictional, she could easily be seen as a stand in for unheralded women of the Irish independence movement, and indeed the female pioneers in the American West.

Whilst these subplots and themes are to be understood as critiques and are there to be reflected upon, the tone of Mammoth is never particularly didactic. Instead, these critiques and mini lessons are unearthed gradually along a narrative filled with warmth, humour and the occasional Nineties reference. And certainly, there are several lessons that can be learnt here, namely around sustainability, race and gender. But perhaps the greatest takeaway is the cyclical nature of history. That if we don’t learn from the past, we are doomed to repeat it. Whether it be hunting a species to extinction, or placing too great an importance on a person’s race or gender in determining their worth to society.

The epilogues, hominid and mammut, do offer a bit of hope for the future. It is here that Flynn goes all Michael Crichton on us, with talk of Pleistocene Park. Yes, it actually exists. But, arguably the second epilogue takes us into the future. A future where scientists have succeeded in using genome engineering to bring back the mammoth. For now, it’s science fiction, but it won’t be too long before the real science catches up. At least, that’s the hope.

Mammoth was every bit the novel I wanted it to be. A wildly compelling and imaginative read, full of wit, humour and intelligence. Flynn has managed to neatly balance the story’s historical and scientific elements, along with valid criticisms of the chequered past of human history, all without sacrificing the novel’s warmth and charm.

Mammoth is out now through University of Queensland Press (UQP). Grab yourself copy from Booktopia HERE

The audiobook of Mammoth, narrated by Rupert Degas, will be released June 1st through Wavesound. For more information head HERE.