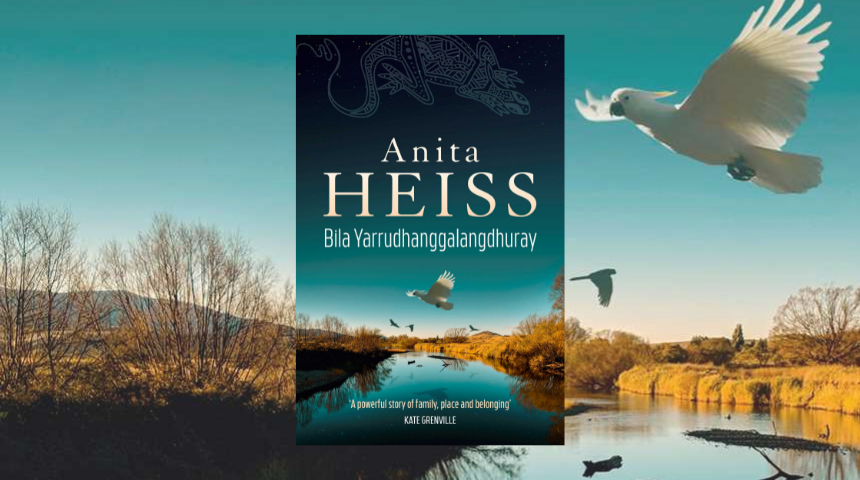 When the Murrumbidgee River bursts its banks and sweeps into the fledgling town of Gundgai, it is Wagadhaany’s father, Yarri, and other Wiradjuri men who come to the rescue of the trapped townsfolk.

Now an indentured servant to the Bradleys – a family who, years ago, ignored her father’s pleading not to build on the low lying land – Wagadhaany watches as the white settlers fete and celebrate their heroes, yet offer them little more than medals and a hearty “Well done!”. The town is, rightfully, grateful, but where is the tangible evidence of it? Where are the wages? The blankets? The returned land? The acknowledgement that this might have been prevented if they’d just listened to Yarri in the first place?

So begins Bila Yarrudhanggalangdhuray (River of Dreams), the latest novel from Anita Heiss. Opening with the Great Flood of 1852, and the real life heroism of Wiradyuri men Yarri and Jacky Jacky, Heiss’ historical fiction dives into the life of Wagadhaany, as she is uprooted from her home and family (in the Wiradjuri language, her “miyagan”), and taken to Wagga Wagga with the Bradleys. It’s a difficult separation, but when she meets stockman Yindyamarra, it seems like Wagadhaany’s heart might actually be able to heal. Yet the rules and restrictions placed upon Indigenous Australians remain in her way, unavoidable and cruel; and while Bila Yarrudhanggalangdhuray is relatively thin on overt drama, these myriad abuses tell their own tale of racism, dehumanisation, and colonialism.

A member of the Wiradjuri Nation of New South Wales herself, Heiss fills Bila Yarrudhanggalangdhuray with the Wiradjuri language. It’s an authentic and important choice, as Wagadhaany clings to the language in a tiny, deeply personal act of defiance in the face of the Bradleys and all those like them.

As well as the burgeoning relationship with Yindyamarra, Wagadhaany has an unlikely and somewhat ineffective ally in the form of Louisa, the Quaker wife of James Bradley. Though she brims with good intentions, and is the closest thing Wagadhaany has to a friend in the household, Louisa remains deeply problematic for Wagadhaany. She wants racial equality, but her methods are prejudiced, influenced, and infantilising. And yet she, like Wagadhaany, is an lonely outlier, needing desperately to belong after losing her entire family in the Gundagai flood. Their relationship is exquisitely explored and crafted, as Wagadhaany wrestles with Louisa’s well meaning, yet patronising, eagerness, and both women’s need to have some kind of friend.

Celebrating family, love, and connection to the land, Bila Yarrudhanggalangdhuray is a profoundly moving showcase of Heiss’ skill for crafting stories and relationships. Fusing what, on the surface, seems to be an historical romance with the grim reality of Indigenous life in colonial Australia, the end result is a novel that is intimate, reflective, and impossible to put down.

Anita Heiss’ Bila Yarrudhanggalangdhuray is out now, through Simon & Schuster. Grab yourself a copy from Booktopia HERE