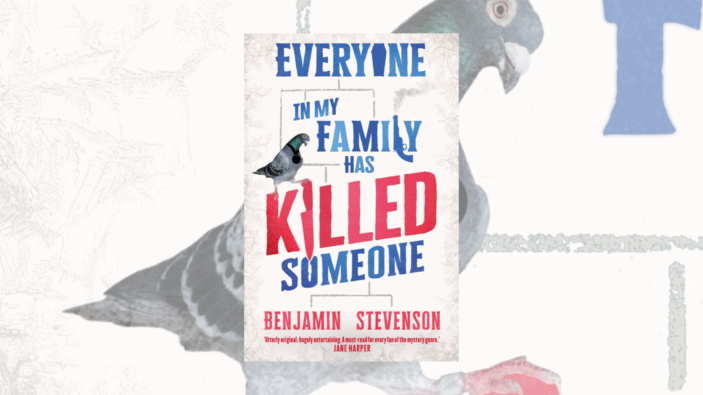 Benjamin Stevenson’s third novel, Everyone in My Family Has Killed Someone, has been described as “Agatha Christie meets Knives Out“; which is a tall order for the whodunit genre and its legion of dedicated followers.

But, I am deeply pleased to report that it is, indeed, a very apt description.

Narrated by our protagonist, Ernest Cunningham, the story takes place over two days at an Australian ski resort, where Ernest and the rest of the Cunninghams (give or take a hyphen) are meeting for a reunion. Between the events of the present day, Ernest narrates each family member’s backstory, introducing the long and layered family history that has led to the dramatic events taking place at the reunion.

The first two pages of the book, before the story even begins, are quotes and a list of rules from John Knox and the Detection Club, a secret society of mystery writers from the 1930s that included Agatha Christie, Dorothy L Sayers and GK Chesterton. So right from the get-go the reader knows exactly what to expect from this novel: a locked-room style murder mystery about the narrator and his family, who have all killed someone (it literally says it on the tin).

The intrigue is also enhanced, in a meta-narrative kind of way, by the fact that Ernest-the-narrator is a writer who writes guides on how to write crime books. In fact, the entire novel is an extended exercise in fourth-wall-breaking. Ernest immediately wins readers over with his self-deprecation, dark humour, and insistence on his own honesty in relaying the story (his name, after all, denotes sincere truth-telling). He even includes asides about the process of writing the book and begins it all with a list of all the page numbers where characters will die. Who wouldn’t be charmed by that level of honesty?

I can’t go into the plot much as it would be very easy to spoil the mystery; and such an enjoyable mystery it is. The framing of the story and Ernest’s narration are what give the book depth, character, and interest – besides the mystery itself of course.

Stevenson has created an original work, using a well known and loved formula. But, making it entirely his own with the use of a darkly comedic narrator and unique framing. I would recommend it to anyone who likes the aforementioned mystery writers, Knives Out, and chatty, endearing narrators who feel like a friend by the end of what would otherwise be quite a dark story of murder and betrayal.

Benjamin Stevenson’s Everyone in My Family Has Killed Someone is out now from Penguin Australia. Grab yourself a copy from Booktopia HERE.