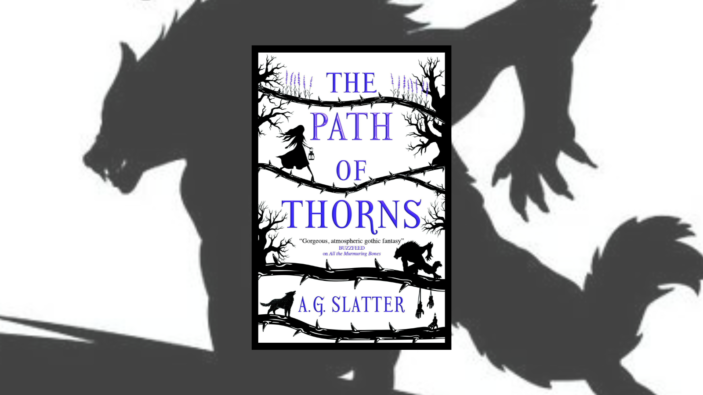 A.G. Slatter‘s The Path of Thorns begins with the arrival of our heroine, Asher Todd, at the large wooded Morwood estate where she is to be governess of the three Morwood children at the estate’s manor. From her arrival it is clear that things at Morwood are not as they seem.

But, Asher holds many secrets, and her long-laid plans have finally led her to this house, this family, and nothing will stop her in her mission to fulfil the promises she made to her dying mother. As time passes and Asher finds herself drawn into the lives of the Morwoods and the people of the estate, and further from the pain and anguish of her mother’s restless death, she wonders if she really can fulfil her terrible promises and do what she came to Morwood to do.

One of the strongest themes through the story is that of the oppression and mistreatment of women, both domestically and institutionally. Slatter’s dark fantasy world – known as the Sourdough universe – is a mirror to our own, a place where magic is real and strange creatures abound. But, where the church also burns witches at the stake and excludes women from learning or practising the art of healing, much like the history of our own world. Asher spends much time reflecting on this state of things, having gifts for both magic and healing, some of it borne naturally within her, some of it knowledge stolen from the university where she worked as a cleaner, as women are not permitted in places of higher learning.

Throughout the story, Asher helps people who are under-resourced and deprived of basic medical care. She does this not so much because she wants to, but because she can and because it needs to be done. In traditionally female spaces, whilst undertaking poorly regarded tasks and undervalued work, Asher gathers information and helps those who need it.

She is not a faultless pillar of strength, but is often overwhelmed, pushed to her limit, and prone to making mistakes. While folding washing with the housekeeper in the basement she asks what became of the governess before her, who seems to have disappeared without a trace. In the attic she helps abort an unwanted child, begat by the master with his favoured maid but also spelling her doom. In a woodsman’s cottage she heals a family of a sickness of unknown origin, then later calls on them for a great favour. Whilst, in the forest she meets a wild man who teasingly torments her, only for them to later take carnal comfort in each other.

Asher is a deeply complex character and generally a badass heroine filled with determination and rage, fortitude and conflict, and her story and the stories of those around her are fascinating, complex, and sad, but ultimately hopeful.

Slatter has created a dark, twisting, captivating tale, all told from the point of view of the intriguing Asher Todd, but also encompassing the lives and troubles of many other characters. In Slatter’s trademark rich syntax, smaller tales are layered throughout the plot, heightening the magic and mystery of this murky tale. The stakes and tension grow steadily through the story, leading readers along a breadcrumb trail of revelations about Asher, her past, the history of the Morwoods, and the dark magic that will bind them all in the end.

Perfect for fans of Krystal Sutherland’s House of Hollow, Neil Gaiman’s Coraline, and any other mash up of fairy tales and fantasy with horror themes sprinkled liberally throughout.

A.G. Slatter’s The Path of Thorns is available now from Titan Books. Grab yourself a copy from Booktopia HERE.