Author Interview: Helen Scheuerer on A Lair of Bones, second series jitters, and building her very own fantasy universe

It’s been a little over a year since Helen Scheuerer officially closed out The Oremere Chronicles with short story collection Dawn of Mist. Now, the indie author is prepping for the launch of an all new dark fantasy series, Curse of the Cyren Queen.

It all kicks off on July 15th with A Lair of Bones, and, in the run-up to the release, we caught up with Helen and asked her to tell us more!

Hi Helen – welcome back to The AU Review! Let’s jump right in – what can you tell us about A Lair of Bones?

Thanks so much for having me back, it’s so lovely to chat to you again, Jodie!

As for A Lair of Bones… it’s the first book in a brand new YA fantasy series, called Curse of the Cyren Queen.

It follows the story of Roh, a cyren who has always been despised by her own kind. Forced to work as a common bone cleaner, she has always believed she belongs above: where lies adventure… and power.

Opportunity arises in the form of the Queen’s Tournament, a treacherous set of trials that could see the victor crowned ruler of the entire lair. Roh goes up against the most cunning, dangerous cyrens in all the realms…

And that’s where our story begins.

The book explores many themes, but above all else it’s about: ambition, unlikely friendships and forging your own path.

Judging from the cover art alone (which, by the way, is STUNNING), it feels like things are going to get pretty dark. Is that a fair assumption?

Thank you! I’m so happy with how the cover turned out. It’s had a great response so far.

And yes, that’s definitely a fair assumption. For some reason I can’t help delving into darker themes and the lair of bones is the perfect backdrop to exploring them.

We’re in the same universe as The Oremere Chronicles – the HSU, I guess! Where does Curse of the Cyren Queen fit into that timeline? And what made you want to come back to this world?

You’re absolutely right, it’s in the same universe as The Oremere Chronicles and for those who’ve read that series, you’ll find a few little Easter eggs throughout.

In terms of the timelines, in my mind Curse of the Cyren Queen runs parallel to the events in TOC, but the stories aren’t connected in any meaningful way. You don’t have to read one to enjoy the other.

As for returning to this world, I suppose part of me never left. But more than that, the realm is just so vast, there was always going to be more of it to explore. 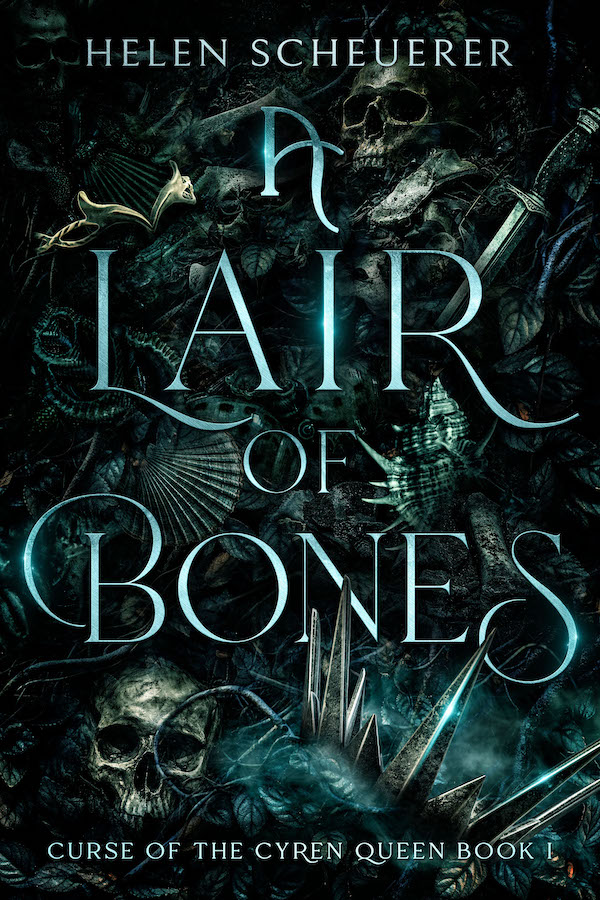 After the success of The Oremere Chronicles, launching something new has got to be a little intimidating! How are you feeling in the run-up?

Truer words have never been spoken!

I’m actually really glad you asked this because I’m a ball of anxiety right now. There’s a different sort of pressure that comes with launching a new series after a successful one and I’m yet to master the numerous worries surrounding that. It’s also been more than two years since I released a full-length novel, so there’s a financial pressure there that I haven’t experienced when launching previous books.

At the moment, it feels like I’m in limbo. I’ve done all I can to make the book the best it can be, now all I can do is wait and see if it resonates with readers.

Did you learn anything from writing the first series that helped you this time round? Are you tackling things any differently as a result?

Absolutely. I learnt a lot by writing and publishing The Oremere Chronicles, mainly the importance of outlining.

I approached Curse of the Cyren Queen a lot more methodically, I outlined the entire series before putting pen to paper for A Lair of Bones. There was a lot more forethought, and I learned to pace myself when it came to the worldbuilding stage as well. I have a tendency to rush ahead, to feel like I’m making progress by putting words down on the page, but the truth is, a lot of the work occurs before this – in the brainstorming process. I had to train myself to understand that this counted as work too, even if I was just staring out the window.

A Lair of Bones won’t be published by Talem Press, as The Oremere Chronicles was. What’s it like going into this next phase solo?

Well, that’s an interesting question… you see, Talem Press was originally created as a solo venture as well.

I published all three Oremere books (I think?) before we published other authors, so it’s been much the same in that respect.

However, it feels different in that this new series and whatever comes next are strategic career moves. They’re part of a long-game plan. I know where I’m heading for the next five years or so, and it felt important to do it solo and be able to put my efforts and energies into my own career.

Last time we spoke, COVID-19 was wreaking havoc across all sorts of industries, and it’s clear that writing and publishing was no exception. It’s always going to be a battle for indie authors like yourself, but are things any less worrying for you now? And with easing restrictions, could we possibly see a book launch in the future?

Yes, I think we spoke around the time Dawn of Mist launched in April 2020 – right in the thick of it all, at least here in NZ.

Things are definitely less intense at the moment, though I’ll admit, I always carry a slight sense of unease within myself at the fact that I get to do what I love for a living, sometimes that seems absolutely baffling to me.

Funny you should mention a book launch. A little while back I posted about how I wasn’t going to do one, but since then, an opportunity has presented itself to me here in Queenstown, New Zealand. I’ll be doing an “In Conversation” style launch event at a local venue. It’s very different to the big launch parties I’ve done in the past, but I’m quietly looking forward to it. It’ll be nice to have an event to mark this next milestone.

While I wish I could pop back to Australia for the usual celebration at Better Read Than Dead in Newtown, it still feels a little too risky at the moment. Perhaps next year!

I feel like we can all probably guess the answer to this, but what’s next once this release is out of the way? How is the rest of the series coming along?

Haha, you know what… the series is coming along really well (touch wood!).

I’ve just received the manuscript for Book 2 back from my editor, the cover is finalised… I’m also nearly done (again, touch wood!) drafting Book 3. In a way, it feels surreal that Book 1 isn’t even out yet, because I’m so deep into this story already. The plan is that it won’t be a long wait between books.

And, of course, it wouldn’t be an author interview without a book recommendation – who or what should we be reading, Helen?

You know, I hate to admit it, but I’ve been in quite a long reading slump this year. Because I’m constantly writing, editing, outlining, or reading non-fiction books on marketing and release strategies, sometimes I get to the end of the day and committing to reading something new just feels a bit too much.

However, one thing that completely sucked me in was Diana Gabaldon’s Outlander books. I had read the first few in the past, but I went down a rabbit hole this year and read the last four or five in the space of a few weeks (and they’re massive books).

I also re-read Six of Crows by Leigh Bardugo, which I absolutely love, and I’ve just started Circe by Madeleine Miller. It’s early days, but I’m enjoying it so far. I’m also very much looking forward to Bonnie Wynne’s next instalment of her series, The Price of Magic.

Our thanks to Helen for her time!

A Lair of Bones hits bookstores on July 15th. In the meantime, you can grab the Cyren Queen Origins novellas for free through Helen’s website HERE!
To purchase Helen’s books, check out her Amazon page HERE.
And for updates, giveaways, and behind-the-scenes snippets, you can follow Helen on Instagram HERE.

Read our past reviews of Helen’s work, or catch up on previous interviews HERE.

Tags: A Lair of Bones, Curse of the Cyren Queen, Helen Scheuerer, The Oremere Chronicles