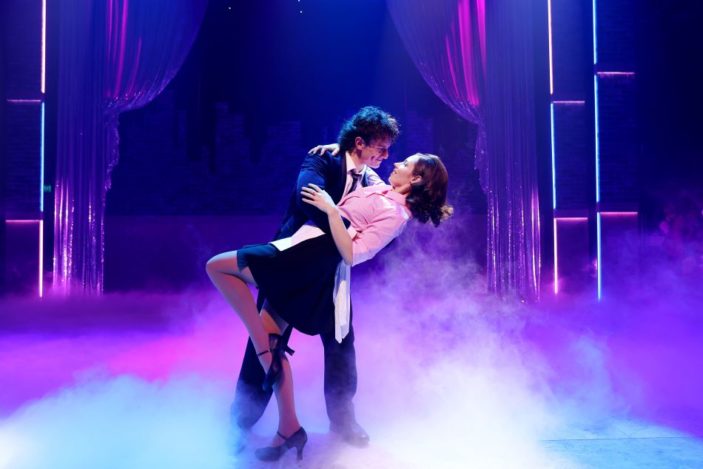 After selling out performances across Broadway and the UK, and lighting up the Athenaeum Theatre in Melbourne in 2021, The Wedding Singer brings its neon lights, flashy perms and dazzling choreography to The Arts Centre’s State Theatre – updating the already brilliant performance with spectacular new sets and costumes, bringing about even more avenues of 80s nostalgia.

Based on the beloved Adam Sandler/Drew Barrymore romantic comedy, The Wedding Singer tells the story of Robbie Hart (Christian Charisiou) a down-on-his-luck wedding singer whose own wedding is turned to ruin. After shattering the joy of other people’s weddings, a waitress named Julia (Teagan Wouters), the woman of Robbie’s dreams, intervenes. In order for Robbie to win the girl, he must overcome his grief and deliver the performance of a lifetime.

From the music and narrative to the choreography and costuming, every element of this production emits vivid 80s-themed stylings – capturing the feel-good fun of the era. Right down to Robbie’s Van Halen and Guns N’ Roses t-shirts, the music, film and TV pop-culture references are plentiful. Whether it’s the melody of an 80s classic playing over the boombox or the appearance of an iconic dance move, this is a celebration of all-things 80s that transcends generations.

Speaking of iconic dance moves, Michael Ralph’s choreography is an explosion of twirls, tricks and high octane dance sequences that light up the stage consistently through the entire show. Cleverly inspired by films such as Footloose and Flashdance, and individuals including Michael Jackson, these energetic dance sequences, combined with the wonderful music, are perfectly zany and will make you want to stand up and bust a move in the aisles.

The vibrant set design really transports you back to the beloved magic of the 80s, enhancing the narrative, while the stellar staging displays an astounding use of the State Theatre’s large stage area. When the “Simply Wed” neon sign lowers from the ceiling, you know exactly where you are, while the versatility of a single staircase sends you through a variety of settings, from a basement bedroom to a second storey balcony. Through every dance sequence and key narrative moment, there’s some exciting choreography across the entire stage – meaning every seat in the house, is the best seat in the house. This encore season’s relocation to the State Theatre means bigger, better and more immersive lighting to go along with the stunningly updated sets.

Being a musical called The Wedding Singer, it’s expected the soundtrack is going to go above and beyond all expectations. And that it does. Whether it be a totally rad rock anthem or a venture into the world of 80s disco, the delightfully original music of The Wedding Singer will have you singing with the windows down the entire ride home. Paying homage to the hottest genres and musical artists of the 80s, this soundtrack is packed with hit, after hit, after hit. Just when you believe you’ve heard your favourite song of the night, in comes another tune that will be playing on repeat in your head for weeks.

Led by stellar performances from Christian Charisiou and Teagan Wouters, who share some electric chemistry in the scenes they’re in together, the ensemble cast of The Wedding Singer delivers high-octane energy, riveting dance moves and wonderful singing performances. From Kirby Burgess bringing the rock and roll vibes with her hilariously daring performance as Linda to the charming Susan-Ann Walker putting a collective grin on the face of the audience whenever Rosie shows up, every member of the talented cast adds something unique to this top-notch production.

Complete with a touch of comedy injected into almost every key moment of the show, keeping things fun and upbeat right through to the end, this musical comedy will have you laughing on your way out the theatre doors.

The Wedding Singer is a wonderful work of art that exhibits vibrant 80s nostalgia, exceptional performances and incredible music throughout the entire production. The spellbinding choreography lights up the stage with electric dance moves, striking costume design and more pop culture references than you can count. Packed to the brim with feel-good moments that put a smile on your face, The Wedding Singer is the perfect show for getting right back into the joys of musical theatre in Australia.

The Wedding Singer’s encore season is playing at the Arts Centre’s State Theatre in Melbourne through to February 20th. For more information and to purchase tickets, head HERE.