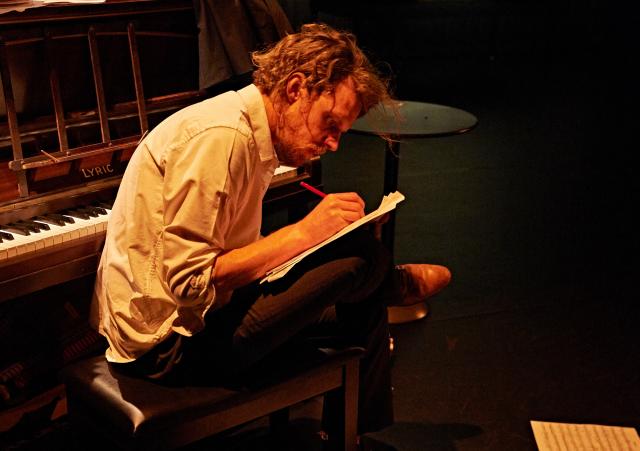 The Song Was Wrong is the third production in Perth Theatre Company’s 2015 season and sees Artistic Director Melissa Cantwell take on both writing and directorial duties. The Song Was Wrong, the story of a love-struck Australian musician Christian and his French muse Cecile, is an utterly beautifully pensive and poetic piece, a quality addition to what has already been a strong season of theatre for the company.

There is much to like about The Song Was Wrong, from the acting down to the smaller details: the costume design (Aurelio Costarella & Fleur Kingsland) and the lighting and set design (Matthew Marshall & Bruce McKinven). As with many of the Perth Theatre Company performances I have seen, they have done remarkable work with the intimate space that is the Studio Underground. I particularly liked the tiered effect they created, opening up the area, but also giving space for other aspects of the story to develop further backstage.

I’ll admit that I had no idea who Aurelio Costarella was going into this performance. I was however very quickly brought into the loop by my friend a dedicated follower of fashion. The costumes ran the gamut from the understated to the ever so slightly ostentatious, but invariably the costumes suited their characters and at times emphasised certain personality traits.

At over two hours, The Song Was Wrong is the longest work in Perth Theatre Company’s season to date, and indeed possibly the longest play I’ve seen so far this year. Yet at no point did I feel myself watching the clock, or counting down the minutes or seconds; I was too captivated in Christian and Cecile’s blossoming yet doomed romance; too curious about the enigmatic older gentleman pushing a pram, or the curious florist with just a hint of Ophelia.

I was definitely impressed by the acting on display from the principal cast. I thought Felix Jozeps in particular was exceptional as pianist Christian. (Though I could have done with a bit of a warning about a certain pair of contact lenses! All in all an un-nerving start to the second act). There were times where it felt like a lesser actor might have drifted into the realm of overacting; yet Jozeps’ portrayal of Christian was nuanced and finely balanced – playing Christian as being undoubtedly flawed, but charismatic and likeable nonetheless. Astrid Grant was also fantastic as Cecile, a character so wonderfully and unabashedly French and outspoken; but also so emotionally fragile.

For a play about a musician; you’d be forgiven for expecting the music to be of a pretty high quality; and Nick Wales’ beautiful score doesn’t disappoint providing an ethereal and evocative soundscape for the action to play out in. The music however did throw up a minor, and largely insignificant quibble that being the ending of the play. Now this might have been some slight technical malfunction, but as the lights dimmed, the music came to an abrupt end as if someone had knocked the needle from the record. It didn’t diminish my enjoyment of the piece on a whole, it just seemed a glaringly immediate end to what was largely a meditative work.

The Song Was Wrong is on at Studio Underground in Perth’s State Theatre Centre of WA until June 20th. For more information and to purchase tickets visit: http://www.perththeatre.com.au/show/song-wrong/

The Reviwer attended the preview performance on 4th June