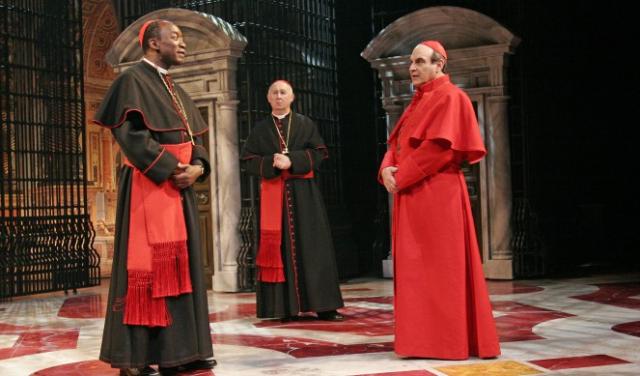 On Wednesday night Perth’s His Majesty’s Theatre stage was transformed into the ornate halls of the Vatican for the opening night of The Last Confession, presented here for the first time in Australia, with venerated British actor David Suchet (Poirot to so many) making his Australian stage debut as Cardinal Benelli.

Set in 1978, The Year of Three Popes, a tumultuous time for the Catholic Church, the play covers the final days of Pope Paul VI (Donald Douglas) and the election of Cardinal Albino Luciani (Richard O’Callaghan) as Pope John Paul I. It is the 33 days of his “reign”, along with the aftermath of his sudden death that provide much of the focus of the play.

Yet despite being described as a “mystery thriller of biblical proportions” in the press releases, this is not simply an ecclesiastical whodunit. If you are expecting another Poirot mystery you are going to be sorely disappointed. Instead The Last Confession is a look into the political manoeuvring and schemeing that takes place behind the scenes in one of the world’s largest and most influential organisations. For all the talk of divine will, and the role of God in choosing a Pope, the role of men (at times power-hungry) should not be forgotten.

This was actually my second time watching the play, I saw it a number of years ago in the UK, and whilst my recollection may be a little hazy the play didn’t seem radically different; indeed from what I’ve been reading the main bulk of the cast remains the same. Interestingly though, this viewing the play seemed to have a touch more resonance, and certainly brought up interesting comparisons to Pope Francis I; who outwardly seems to have a similar disposition to Pope John Paul I (and may even have got a passing mention in the play too).

With a large ensemble cast, it was on the odd occasion a little hard keeping track of which Cardinal was which, and who didn’t like whom, but I got there in the end. It was a fantastic ensemble performance from the whole cast; Suchet was unsurprisingly excellent as Cardinal Benelli, and I think really demonstrated Benelli’s crisis of faith, and his attempts to reconcile his desire for power with his faith. I also enjoyed O’Callaghan’s portrayal of Pope John Paul I, and it was from his characters that a few of the productions moments of levity and humour arose. Initially I was a bit disconcerted by Philip Craig portrayal of the Confessor, especially when it became clear who his character was [Spoilers], I think I initially just found it difficult to reconcile his portrayal with the image presented through the media.

The Last Confession is a very dialogue heavy piece, and running at 2 ½ hours with an interval it may perhaps tax more than a few more casual theatregoers. That being said it is a well paced production, and at no point over the course of the evening did I find myself drifting or losing interest, instead Suchet and Co held my attention for the duration; even my friend – who had been up since 5 that morning, was engrossed throughout.

I was impressed with the set design, which conjured up the foreboding ornateness of the Vatican; but allowed for quick and easy scene changes. Also the metal bars help give the impression of the Vatican as a “prison” reinforcing an idea which is touched on during Pope John Paul I conversation with a gardener in the second act.

The Last Confession is a fantastic production, boasting an impressive and experienced international cast, headed up by the very recognisable David Suchet. A well-presented, intelligent and thought-provoking production that perhaps has more in common with House of Cards than Poirot (though Cardinal Benelli is no Frank Underwood). Not so much an ecclesiastical game of cluedo but a thoughtful and considered look into the behind the scenes mechanisations of one of the world’s most powerful organisations, The Catholic Church.

—————-
Performances continue in Perth through August 16th, before moving onto other cities. Tickets to the Perth shows are here: http://premier.ticketek.com.au/shows/show.aspx?sh=THELASTC14