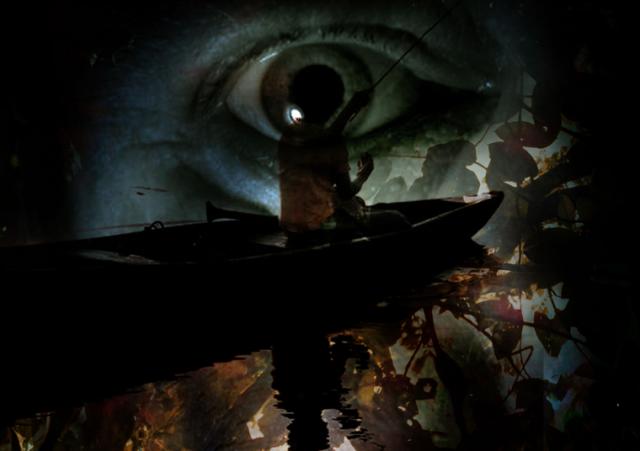 The Boat Goes Over The Mountain is the latest theatrical instalment in the current season at Perth’s Blue Room Theatre. Presented by Happy Dagger Theatre, and developed by and starring Andrew Hale; the production is essentially a one-man play, with accompaniment of a miscellany of instruments from Dave Richardson. It is a frantic mediation on one mans mid life crisis and the lengths he will go to beat it.

It was an enjoyable production, albeit one that demands your attention. A feat made easier considering from the outset Hale captivates and draws in the audience. With the majority of the focus all on him, Hale delivers a fantastic performance, creating a character that whilst perhaps not exactly likeable, is believable and engaging enough for the audience to become invested in his journey through the many ceremonies.

I liked the simplicity and the versatility of the set design, a wooden structure that served not only as a prop but also as percussion. Despite its simplicity the wooden structure took on many shapes and meanings throughout the production, from the metaphorical cage at the beginning of the play, to the hull of a boat. The lighting and the sound effects added to the exotic feeling of being in the midst of a Peruvian jungle – whilst also adding emphasis to the characters internal struggles.

The Boat Goes Over The Mountain is an engaging and curious production, that is darkly comic and poetic. Whilst I did find myself a little lost at times with the shifts in the narrative, it is for the most part not too difficult to follow, and you quickly find yourself invested in the characters journey of “self discovery”. The highlight for me was Hales performance, but really it’s an impressive production all round.