Before Moulin Rouge! premiered at New York’s Al Hirshfeld Theatre on July 25th, 2019, a theatre where Kinky Boots had called a home for the 6 years prior, the producers did something quite surprising: so sure they were of its popularity, they announced it would tour out of New York – including a 2021 run at The Regent Theatre in Melbourne.

It’s risky to do this, because you want people to travel for the show, not wait for it to arrive in their own city. You also don’t know if anyone is going to like the show enough to warrant the tour. But it doesn’t seem to have affected ticket sales; most of their 8 shows a week look to be sell outs, and when I went last month, it received a rousing standing ovation – a good sign the show is here to stay, and that the risk payed off.

The show – which runs at two hours and 45 minutes, with a 15 minute intermission – is set in 1899 inside the Moulin Rouge, with a stage that’s designed to ignite the spectacular ideals of the venue, and the original film. The storyline follows the original film to a note, with dozens more songs thrown in along the way – the show being a jukebox of modern and classic tracks, with one medley moving into the next. It’s here the show struggles, adding half an hour the the source material without adding any real changes to the storyline (even Aladdin added some backstory).

And there’s definitely some songs included which don’t deserved to be placed next to the classics of The Police, David Bowie and Elton John – the music that made the original film so vibrant and such a success.

I would have preferred them to write a couple of new songs rather than lean so heavily on a modern pop catalogue – though I totally understand that’s having an issue with a base concept of the show, whose source material doesn’t have any original lyrical music (even “Come What May” was technically written for another film). But it’s in that concept – plus it being as over the top as the original – that may help it struggle to connect with a regular theatre goer.

I think more casual – especially younger – audiences will love it because they know the music, and if you loved the film you’ll enjoy it. But the newer song choices just aren’t as strong as the classics. Call me a pretentious music snob, but it’s nearly impossible to argue that the incredible rendition of “Roxanne” by The Police both here and in the film should receive equal billing to “Firework” by Katy Perry. And it’s not that they don’t do the latter track without a wink to the audience, they do know it’s cheesy (as do the audience), but they certainly have the foresight (and budget) to include better songs like “Sympathy For The Devil” by The Rolling Stones (with “Gimme Shelter” and “You Can’t Always Get What You Want” mixed in, quite wonderfully). So it just struggles to gel.

Still, the new material doesn’t always come up empty handed. Sia’s “Chandelier” worked surprisingly well and “Bad Romance” by Lady Gaga, which helps open up the second act with the “Backstage Romance” medley, is one of the best numbers in the show. During that piece you’ll also hear “Seven Nation Army” by The White Stripes, “Toxic” by Britney Spears and “Sweet Dreams (Are Made of This)” by the Eurythmics. And I got a kick out of hearing “Torn” amongst the mix elsewhere and The Postal Service’s “Such Great Heights” – so there’s something for everyone in there. And the medleys are often beautifully arranged. 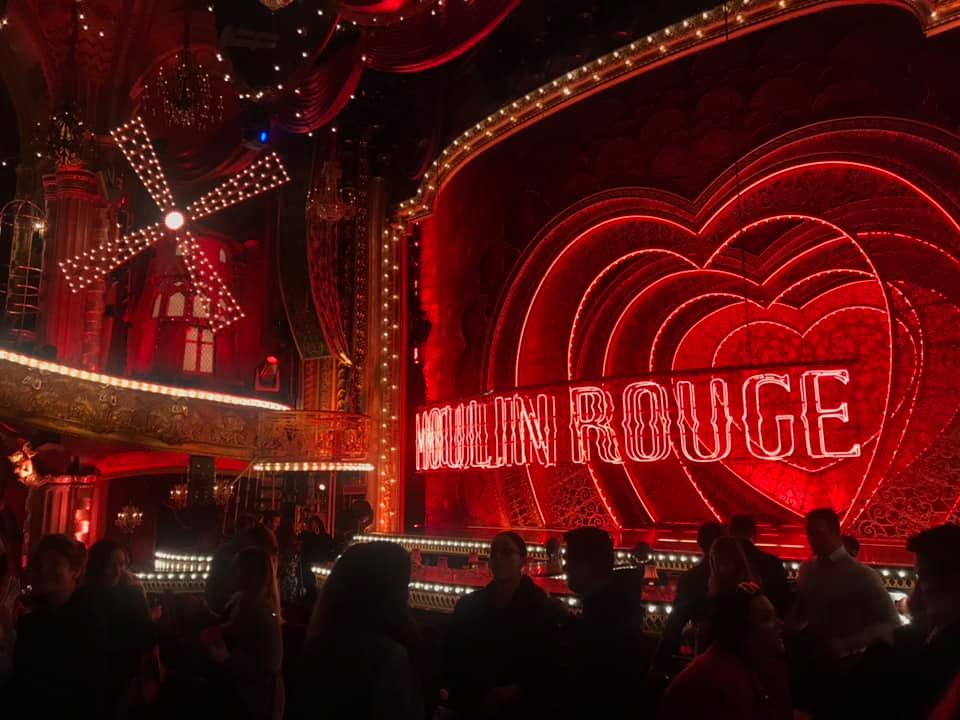 Ultimately, it’s a whole lot of fun, and it’s the spectacle that makes it truly worthwhile. The lighting and stage design by Justin Townsend and Derek McLane, respectively, and general vibrancy of the room – with the wizardry of Global Creatures partially responsible – is truly something to behold. The choreography is marvelous and it’s hard not to get caught up in the majesty of it all. You’ve never seen a show like it – and it’s in a class of its own even when comparing it to the real Moulin Rouge.

Though some musical theatre goers may turn their nose up to some of the song choices, it’s everything you’d expect from a Baz Luhrmann musical. It’s spectacular, it’s dazzling, it’s a hell of a good time. Every fan of the film needs to add it to their “must see” list. Just be prepared to grin and bear it through some of the soundtrack’s more trying inclusions – while knowing that your kid’s going to love it and probably going to sing along to every song. And really, this has been made for them as much as it has been for you, or for me, so what am I complaining about? All this in mind, it’s of no surprise the crowd gave it a rousing ovation.

Moulin Rouge! The Musical is now playing at Broadway’s Al Hirschfeld Theatre, where it opened in July of 2019. It will open in Melbourne at The Regent Theatre in 2021 (at a date TBA) and in London at the Piccadilly Theatre in March 2021.

The show will tour in New Orleans, Chicago and San Francisco from November 2020. The Moulin Rouge! The Musical Original Broadway Cast Recording is produced by Grammy-nominated Baz Luhrmann, Justin Levine, Matt Stine and Alex Timbers, and is out now.

For more details about the run in New York, and upcoming runs around the world, head to moulinrougemusical.com.

How Do I Get Cheap Tickets to Moulin Rouge! The Musical? Hot Tip: Enter the ballot lottery through Lucky Seat for a chance at discounted $29 tickets.

The author attended at his own expense on Sunday 12th January 2020. Headline photo provided, inline photo by the author. While in New York, we stayed walking distance from the venue at the Hilton Midtown Manhattan Hotel.