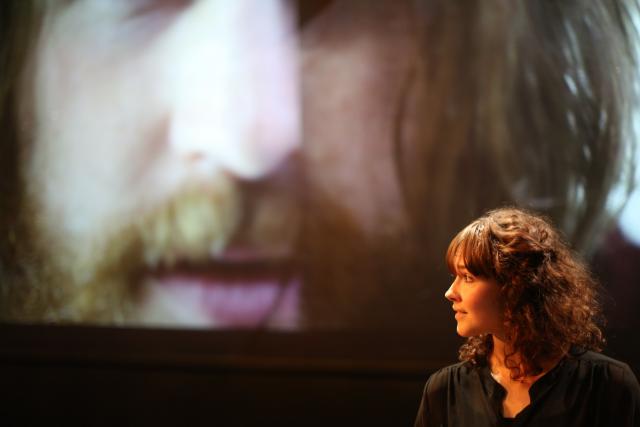 Hedda, currently being presented at Perth’s The Blue Room Theatre, is a reinterpretation of Norwegian playwright Henrik Ibsen’s classic play Hedda Gabler; originally written and produced in the 19th century. A multicultural effort of sorts, the production sees Norwegian actress and producer Marthe Snorresdotter Rovik collaborate with actor and director Renato Febratti, a graduate of WAAPA.

The script is adapted from Rovik’s native Norwegian and is billed as being designed to showing Australian audiences Hedda, ‘as Ibsen intended’. Though (perhaps foolishly) I went into the performance with only a passing knowledge of the play and it’s plot, so I’m can’t comment too much on that statement. It was, however, a confronting and engaging performance, made all the more so by the intimate confines of the theatre space.

The decision to stage the majority of the play within a thin-carpeted strip in the centre of the space is a good one. The placement of the audience on either side of the action, not only serves to wrong-foot the audience, but also gives the sense of being closer to the action, allowing you to witness the machinations of Hedda more closely than you would in a more traditional setting.

Rovik is sublimely menacing and manipulative as Hedda, bringing an enigmatic and at times gleeful malice to the character. This malice is perfectly counterpointed by the nervous innocence of her “friend” Thea, played by fellow Norwegian Tone Skaardal. Despite impressive performances from the other cast, it is these two women that draw your attention, their strained relationship putting a spotlight on Hedda’s more negative traits.

Running at 90 minutes without an interval, this is not an easy performance to watch; it demands your attention, but ultimately you will be rewarded for your concentration. Hedda is an interesting and thought provoking performance, one that will have you deep in discussion on your journey home.

Hedda is running each night at 8.30 until August 31st at The Blue Room Theatre.