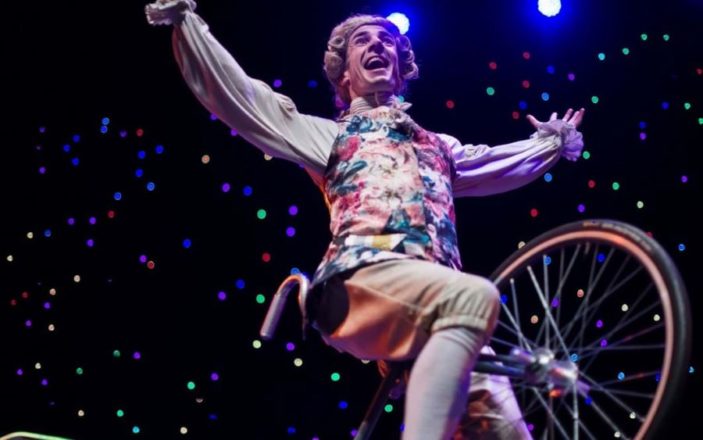 Presented by Circa, Wolfgang’s Magical Musical Circus has a short stint at the Theatre Royal, adding a cheeky element of fun to the school holidays. The show is a more ‘child-friendly’ version of its adult counterpart, Circa’s Peepshow, which runs parallel in the evenings.

The classical composer’s music comes to life on stage as the performers reimagine Mozart’s works. Wolfgang bursts into the imagination of a girl waiting for her birthday party guests to arrive and chaos ensues. Everything is manipulated including the music, lighting and props.

One element that Wolfgang’s Magical Musical Circus triumphs is integrating the audience into the show. There is nothing more exciting for a young audience to see the performers up close, running and jumping across seats and then climbing back on stage. An audience member even gets invited on stage to become the new Mozart.

The two sole acrobatic performers that appear in this production is Wolfgang himself, played by Paul O’Keeffe, and the birthday girl he lifts the spirits of, played by Kathryn O’Keeffe. In the background is the accordionist, played by Gareth Chin, who rightfully steals the limelight on several occasions.

Kathryn O’Keeffe is strong and powerful and quite literally, carries Paul O’Keeffe through a few manoeuvres. She is impressive and can command the stage with ease. From classical moves on pointe shoes to balancing in the most complicated positions on a chair, Kathryn O’Keeffe is just mesmerising.

Paul O’Keeffe as Wolfgang/Mozart, the star of the show, is a pleasure to watch and, in some instances, really difficult to watch (the stunts looked literally impossible!). He has a wonderful comic persona as Wolfgang, reminiscent of a young Martin Short (with off-the-scale levels of fitness). He had the audience in stitches of laughter while simultaneously gasping at his extraordinary acrobatics.

Wolfgang’s Magical Musical Circus is engaging, suspenseful and, according to a six-year-old in attendance, “it’s so cool”. The show runs for approximately one hour with no intermission. It is a great school holiday treat full of energy that both adults and children will enjoy.

For more information and to book, visit the official website HERE