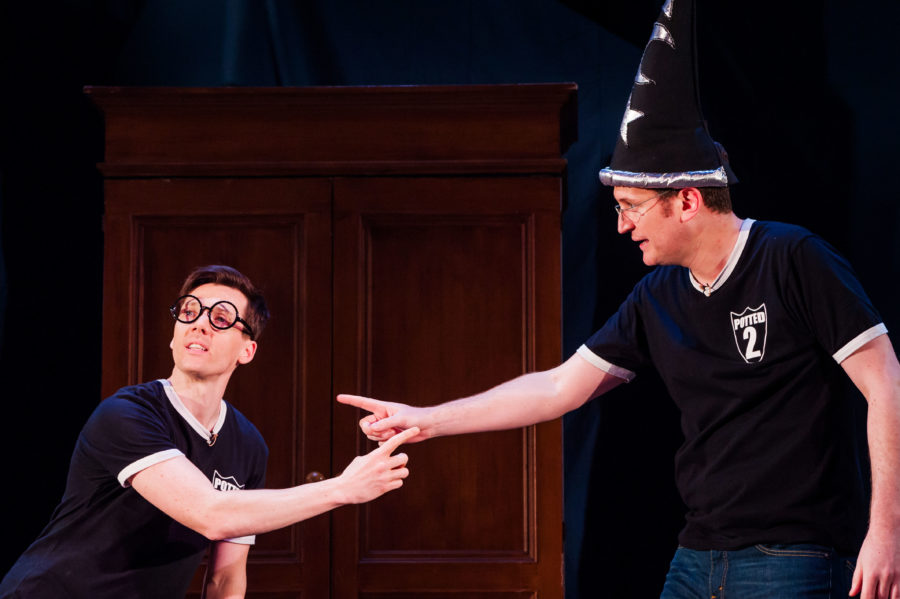 First, there was the Complete Works of William Shakespeare – Abridged, and now we have Potted Potter – The Unauthorised Harry Experience – A Parody by Dan and Jeff (a title that, like the eponymous show, tries desperately to cram as much as possible into a very short space). Covering all seven Harry Potter books with two actors in just seventy minutes proves doable, and overall very funny, but it’s not quite the laugh-till-you-cry, my-head-hurts, need-to-see-it-again-to-take-it-all-in experience this reviewer was hoping for.

The show is described as ‘perfect for ages six to Dumbledore (who is very old indeed)’, which is really a clue for would-be audiences. It’s a tough ask to create a show that appeals equally to children and adults, and it’s a task made considerably harder by the multi-generational appeal of Harry Potter. There are people who grew up reading the books when they were first published, ageing alongside Harry as he progressed through wizarding school. Then there are the late-to-the-party types like myself, who binged the full series of books once they realised they were worthy of the hype. And you’ve got the film buffs, who know nothing of the written version and cannot picture anyone but Daniel Radcliffe as Potter. Finally, you’ve got the next generation of kids, to whom the wizarding world is opening up far quicker than it did for their parents, with all its resplendent merchandise. How do you create a show that keeps all these folks happy?

The answer is – you don’t. Or, more accurately, you will probably end up disappointing a few of them, particularly the older, obsessive types. Because, although Potted Potter contains some clever one-liners that will get the adults gasping and sniggering, on the whole the show pitches to the franchise’s younger fans. 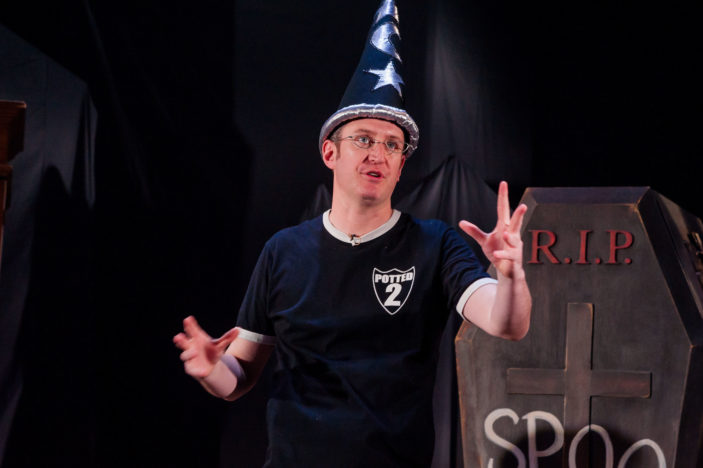 Taking us on the condensed journey into the wizarding world are Daniel Clarkson and Scott Hoatson, who between them play a selection of J.K. Rowling’s characters, differentiated through a variety of wigs and other silly props. They also created the piece. Dan and Scott do a wonderful job of maintaining the energy throughout, running to and fro like a couple of nifflers in search of shiny objects. Their character voices are sterotypical and obvious, their movements frenetic and playful, and both these things suit the style of the piece, although an occasional change of pace would have been nice. But they do tend to rely a lot on cheesy props, which they enjoy beating each other with from time to time.

You don’t need to be a die-hard Harry Potter fan to appreciate the comedy, but a passing knowledge of the seven-part saga (eight if you’re watching the movies) is definitely required. That said, Dan and Scott do a lot of hard work trying to convince us that they don’t really know what’s going on. This is where the show drifts away from parody and into childish buffoonery. At times, the banter becomes quite repetitive; appealing for kids, perhaps, but tedious for the predominantly adult audience attending opening night. It’s entertaining enough, but true fans of the wizarding world will probably be left feeling a little underwhelmed.

Set-wise there’s also not much to critique. The show is performed on the front third of an empty stage with no backdrop, save for some curtain-draped set pieces that remain hidden throughout the entire performance. To be honest, it wasn’t clear if this was intentional set-design, or just a case of borrowing the stage of another production for a few nights. The few items of furniture that are used by Dan and Jeff prove little more than sight-gags. The only ‘magic’ here is when the cupboard doors are opened to reveal a screen for the floor-mounted projector (and even then, this is baseline stuff). 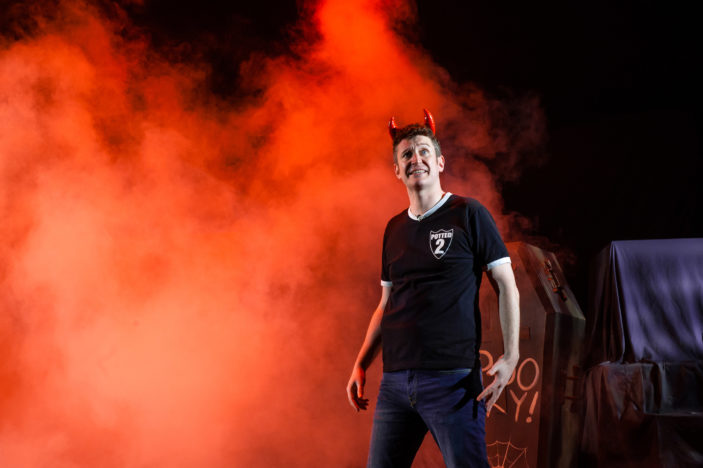 Before the show officially starts, Scott sits onstage at a desk, reading one of the Potter books. The desk is resting upon a small stage created entirely from books. It’s a clever little creation, and provides easy access to the books and the other small, hand-held props used during the show. But this is as interesting as the design gets. One gets the feeling that this show could be performed just about anywhere, making it great for school tours but a little lacklustre in the theatre, despite the OTT lighting effects.

Overall, it is an entertaining show and doesn’t require much of its audience. You will definitely have a laugh. However, for the best Unauthorised Harry Experience, dress the kids up in their favourite house robes, pack the wands and allow yourself to be swept up in simple fun for an hour and a bit.

Potted Potter is playing at the Seymour Centre for a very limited season until the 23rd September. For tickets, click HERE.

The reviewer attended the opening night on Wednesday 19th September.