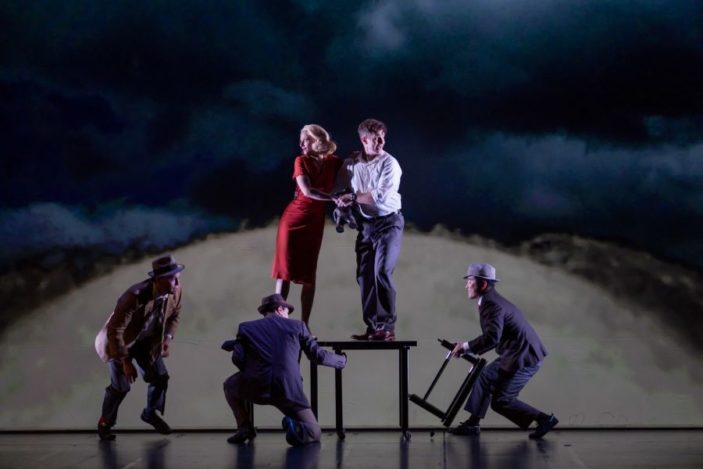 Before walking into the theatre, the quality of the storyline has already been confirmed as this play is based on the 1959 film directed and produced by Alfred Hitchcock who brought audiences iconic classics such as Vertigo (1958), Strangers on a Train (1951) and Psycho (1960).

Considered the first ‘James Bond’ before there was any, North by Northwest has all the trappings of a spy/suspense-thriller. The story tells the tale of a case of mistaken identity as advertising executive (twice married, twice divorced) Roger Thornhill is mistaken for George Kaplan and then accused of a murder he didn’t commit.

This production of North by Northwest stems from a 2015 Melbourne Theatre Company season which then travelled to the UK and Canada before returning to our shores, this time with a Sydney 2022 run.

The star of the show, who had a big and exhausting performance to pull off, is the one and only Aussie icon, David Campbell, playing Roger O. Thornhill. There is an unconscious comparison drawn between Campbell and Cary Grant (who held the role in the feature film), which are hard shoes to fill. However, Campbell pulls it off with his own style and flair. Campbell has great energy across the two-hour show time which included the encompassing of a suave and sophisticated yet cheeky personality and executing all sorts of acrobatics, climbing on set pieces, and running from a digital crop-dusting plane.

Thornhill’s leading lady, Eve Kendall, is played by Amber McMahon. She is an outstanding femme fatale, blending an air of mystery with passion and grace. Both Campbell and McMahon work well together, capturing the excitement and intrigue of their circumstances. They meet, as strangers on a train, and end up dangling from dizzying heights on Mount Rushmore.

North by Northwest has some larger-than-life locations which would be difficult to re-create on a stage, however, using a seemingly simple metal framing, audiences were following characters to bars, hotel rooms, boarding a train, standing in a crop field and, in the most climactic scenes, climbing across the presidents of Mount Rushmore. It was impressive and a lot of fun to watch.

Perhaps the most unique and creative aspect of the production is the integration of screen projection that was cast on the back of the stage. Arguably a lazy way to tell the story, the projections in this case were crucial to the audience’s engagement with (and believability) of the story unfolding. They were also a perfect source of comedy, which had the cast integrated with the (miniature) props to the sides of stage that came to life on screen.

North by Northwest is a sensational production and a wonderful tribute to the work of Hitchcock. Bringing a film like this to the stage seems like a ridiculous concept however it was masterfully done with the 1950s flair intact.

North by Northwest is playing at the Sydney Lyric Theatre until 3 April. For tickets and more details head to: https://www.northbynorthwesttheplay.com/