Theatre Review: Charlie & the Chocolate Factory (in Sydney until May 2019) was absolutely, positively scrumdiddlyumptious!

It didn’t matter if you were six, one hundred and six, or somewhere in between. Charlie & the Chocolate Factory made us all act like little kids in a candy shop. This was a joyous musical based on the beloved Roald Dahl book and one that successfully straddles the lines between lightness and darkness. It also looks poised to follow in the footsteps of that other enchanting Dahl story-turned-hit musical, Matilda.

A lot of this show rides on the tiny shoulders of the boy who plays the downtrodden Charlie Bucket. The opening performance saw Ryan Yeates who people may recognise from the TV show, Wiggle Wiggle Wiggle in these shoes. He shares this role with Xion Jarvis, Tommy Blair and Oliver Alkhair. Yeates was endearing as the poor but golden-hearted boy with a bucket-load of hope.

Another big part of this musical is Messer Wonka himself. He is played by American actor, Paul Slade Smith who had a minor role in the Broadway adaptation. Slade’s Wonka feels like it has a lot more in common with Gene Wilder’s charming and dark eccentric, rather than the unhinged one played by Johnny Depp. Unlike the films, this Wonka doubles as the owner of a chocolate shop. It’s a great vehicle for the song, “Candy Man” and for Bucket to learn about the golden ticket winners.

The first half is a tad too long but it has a lot to tackle in order to set the scene. The audience learn that unconventional inventor, Willy Wonka, will open the doors of his chocolate factory to five golden ticket winners. Four of these are eventually won by terrible children, who are played here by adult actors. There is a Bavarian beefcake, Augustus Gloop (Jake Fehily); spoilt Russian ballerina, Veruca Salt (Karina Russell); celebrity-obsessed, professional gum chewer, Violet Beauregard (Monette McKay); and Mike Teavee (Harrison Riley).

The story has been modernised so Teavee is now a computer hacker. While a lot of this show is built around the Broadway production (including director, Jack O’Brien and many of the other creatives) there are local references to things like Ned Kelly and the Eureka Stockade. This is a nice touch and means we Aussies can claim Charlie as our very own. 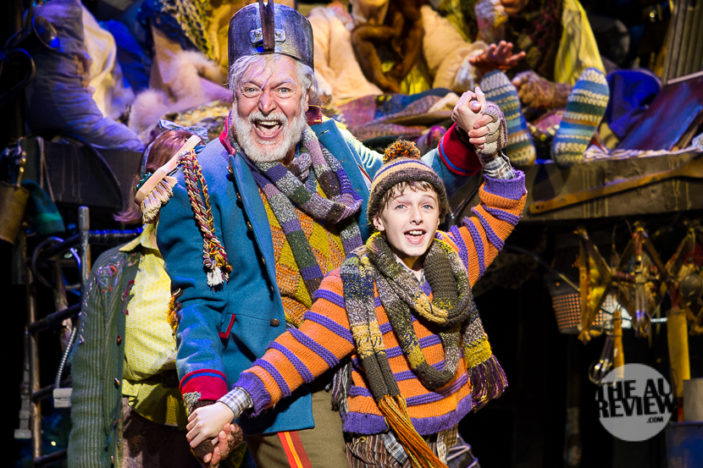 Tony Sheldon returns to the Capitol Theatre after playing Bernadette in Priscilla last year. In this production he plays the 90.5-year-old Grandpa Joe who accompanies Charlie to Wonka’s house of fun. Sheldon is fabulous as the doddery old man while Charlie’s mother (Lucy Maunder) is a strong and resilient woman who has to toil away at work.

The second half is where the real magic happens. It all takes place in the factory and the sets are rather clever in that they condense many different moods and settings into some neat packages. That said though, the one used in the “Pure Imagination” song could have done with a little more of the 1971 film’s pixie dust, but this is a minor quibble.

This production has some incredible effects and grand spectacles. There are lots of ah-ha moments, which will leave you guessing. The music is also bewitching. Hairspray writers, Marc Shaiman and Scott Wittman have created some fabulous new numbers which sit well alongside old favourites like “Golden Ticket.” People will be singing these as they leave the theatre. Everything comes together in this fun and vibrant show. It ensures that a new generation of fans will come to love this story as much as the nostalgic parents and grandparents sitting next to them.

Now there’s an elephant in the room. Okay not literally but there are those cheeky little oompa loompas to deal with. They are one of the highlights of the proceedings but we don’t want to give too much away. Suffice to say that their choreography by Joshua Bergasse and the rendering by the ensemble cast is absolutely stunning. Look out for the tap dancing in particular. These creatures also ensure that you really get swept away in the danger and drama of Dahl’s classic.

Charlie & the Chocolate Factory is one magical show. There is a lot of heart as well as some funny and tense moments in this fairy-tale. The real take-home message of course is that kindness prevails and that anything is possible with some faith and hope. This show is like having all your dreams come true at once; it really is that delightful. So beg, borrow or steal but do make sure you get your hands on one of those golden tickets!