Theatre Review: An American in Paris is a magical fusion of ballet and musical theatre 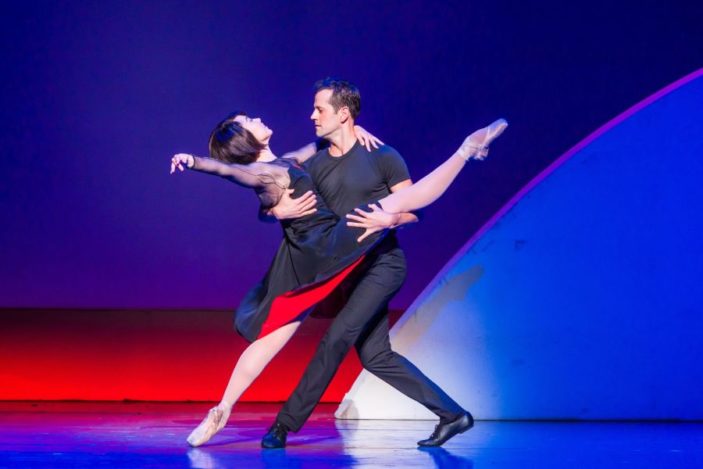 The worlds of ballet and musical theatre collide in An American in Paris, creating an extraordinary blend of timeless music, breathtaking choreography and a captivating love story set against the romantic backdrop of Paris.

Inspired by the 1951 Oscar-winning film of the same name, and incorporating music from George and Ira Gershwin, An American in Paris is a story about finding love, happiness and new beginnings in the aftermath of World War II. It follows Jerry (Robbie Fairchild), an American soldier who instantly falls in love with a talented ballet dancer, Lise (Leanne Cope), upon arriving in The City of Lights. However, their relationship faces complicated turns when an American heiress takes an interest in Jerry, and Lise becomes tied to another man.

When the production begins and the music swells, the dimly-lit stage is set with a lone piano in the centre. A moody opening brilliantly establishes the post-war time period, and within minutes you’re instantly transported to the heart of Paris, accompanied by stunning artistic backdrops and a beautiful rendition of George Gershwin’s ‘Concerto in F‘. As the narrative moves from one location to the next, the State Theatre’s stage is draped in opulent, highly-detailed sets that draw the eye to every corner. The set design across every location is wonderfully intricate and wondrous to look at, with seamless staging and scene transitions tightening the awe-inspiring grasp the production has over the entire audience.

The sets may be amazing, but the ballet performances take centre stage – lighting up the theatre with exquisite choreography orchestrated by Christopher Wheeldon, who won a Tony award for the original Broadway run of this production. Whether the musical numbers are accompanied by a solo dancer, a pair of dancers, or the entire ensemble, it’s a sight to behold. Along with the dance numbers, the jazzy soundtrack is packed with upbeat hits and beautiful melodies to guide the emotion-rich narrative through its main beats.

As someone not widely familiar with the art of ballet choreography, these talented performers had me hooked in with the way they effortlessly glide across the stage, unable to take my eyes off their spellbinding brilliance. 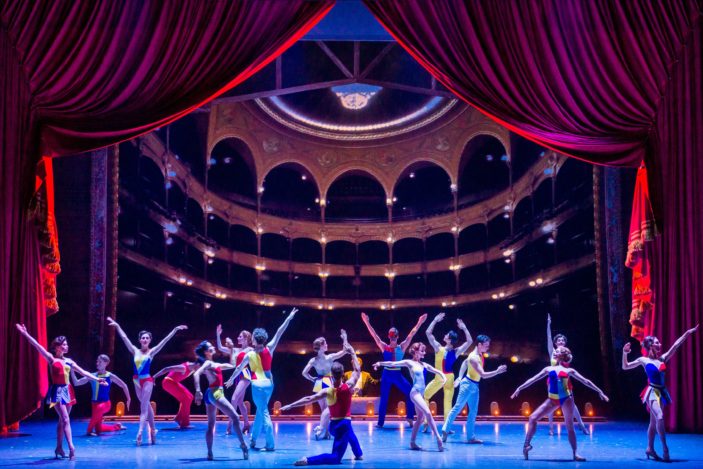 Specifically, I must highlight what is the climactic ballet performance – a masterfully-crafted piece of artistry that tells a beautiful story packed with emotion and without a single spoken word. At the centre of this sequence is Leanne Cope, who weaves her way across the stage (with help from the wider ensemble) to deliver a ballet performance that stands on its own as perhaps the most spectacular and memorable moment of the show.

Speaking of Leanne Cope, it’s not just her brilliant dancing that’s noteworthy – her overall performance as Lise Dassin is emotionally resonant and impactful from the moment she first sets foot on stage. There’s a very delicate and loveable quality to her performance that gets the audience intrigued in her journey through this narrative.

Performing alongside Leanne is Robbie Fairchild, who is just as powerful in every moment whether he’s sharing the stage with Leanne or any of the other performers. The infectious chemistry this pair shares leaps off the stage, allowing the audience to instantly buy into their developing romance. Having performed these roles in the original Broadway production (2015), as well as the original West End production (2017), they effortlessly transform into these characters while on-stage and nail every moment to perfection.

What’s astounding about this production is that not only are the two returning leads amazing, but the wider ensemble of performances have their own scene-stealing moments. Namely, Sam Ward (Henri), Jonathan Hickey (Adam) and Ashleigh Rubenach (Milo) all have moments where they shine on screen, both in their dancing and singing performances. There’s even a noteworthy amount of comedy spread throughout the show that garnered big laughs from the audience, enhancing the levity and charm of many key scenes.

An American in Paris is a musical like no other – seamlessly blending the storytelling scope of a Broadway musical with the elegant dance numbers of a ballet to create a truly magical experience. Stunning set design, backdrops and staging allow audiences to effortlessly visualise the setting of each scene, while the breathtaking choreography remains endlessly entertaining until the final curtain call. The jazzy soundtrack is guaranteed to get you moving in your seat and tapping away the whole ride home. Get ready to be swept away by the beauty of ballet and the wonder of musical theatre – the best of both worlds, in one place!

An American in Paris is playing at the Arts Centre’s State Theatre in Melbourne through to April 23rd. For more information and to purchase tickets, head HERE.