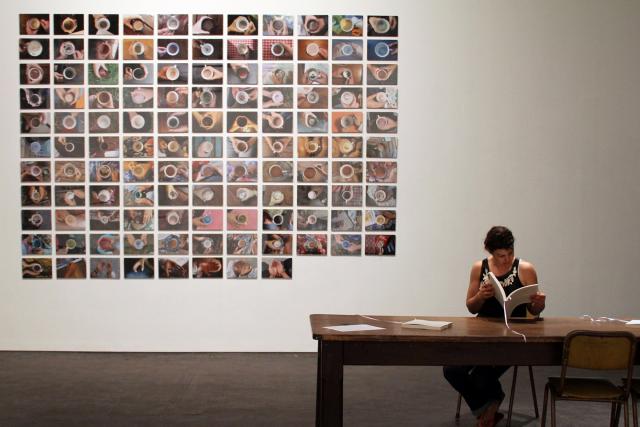 Tea is commonly thought of as a sweet and calming beverage. We do not immediately associate it with salt, death, and the political upheaval in Kashmir, because we do not speak about it — but that is exactly what artist Alana Hunt is trying to change. “Cups of nun chai; a memorial” is a work that began as a response to the killing of peaceful protesters by the Government in 2010, and this year, it has been shortlisted for the Blake Prize. Emily Booth caught up with Hunt about “Cups of nun chai”, her connection to Kashmir, and the future of this project.

In Kashmir, “nun chai” (which means “salt tea”) is drunk every day. Alana Hunt was visiting the region in the summer of 2010 when government forces began killing civilians and peaceful protesters. The local media provided some coverage of these events, but when she returned to Sydney, she discovered that most people didn’t know about the conflict occurring overseas. On the day the death toll struck 69, she realised that there were 69 cups of nun chai in Kashmir that had ceased to exist.

Her response was ‘to have one cup of nun chai with anybody who was willing to have a cup with me … to talk about it. To try and not let it disappear, or become another statistic.’ In this way, she says, ‘having the nun chai became a way of marking that loss of life. And the project followed me over a three-year period. In different parts of Australia, in Thailand and Europe, and then the last third took place in India and Kashmir. The project returned to where it had emerged from, and that wasn’t something I had envisioned at the start. But I felt it was for the best.’

Originally, Hunt planned to do this until the killing stopped, but Kashmir has a history of violence, and there was no foreseeable end.

As the conflict continued, she decided to cap the project at 118 cups: the number of people lost over that one summer, and only a fraction of the lives lost in the past years.

‘I feel like I’m never speaking as a Kashmiri, and I wouldn’t want to do that. But when you see things [like] what you see in Kashmir, with the military occupation and the way that it has shaped people’s lives, and brought the most horrible nightmares you can imagine to people’s everyday life… it’s not something you can walk away from. And that’s when there becomes that necessity to share some of those stories, or engage in that conversation. Having the work as a website, initially, was a conscious effort to make sure it was accessible to a whole range of people.’

The project is a blend of images and text: photos of her conversation partners’ hands holding their cups of nun chai, accompanied by Hunt’s observations about their discussions. It’s easy to see how intense her connection is to Kashmir; a bond she says has been strengthened since this project. But her entries also reveal how her experiences have changed her irreversibly: in the entry accompanying the first cup of nun chai, Hunt writes, ‘I am not sure freedom or happiness can ever be held on to or materially grasped. When Kashmir attains freedom there will, no doubt, be more un-freedoms to come. There will continue to be happiness and unhappiness. Out of necessity these are slippery ideas and experiences, and we need to find ways to carve out spaces they can slide into.’

“Cups of nun chai” does exactly this, providing a space that is as much a place of mourning as it is of honour, remembrance, and hope.

‘I was looking at ways to mark that through… feeling. But also through writing histories. The idea of taking photos of people holding their cups of tea — for me, it’s an allegory of possibility. When you see all those hands together, holding their tea, it’s an allegory of what could be possible if we cared. And the gesture of holding one’s hands around a teacup, there’s something very caring about that.’

In Hunt’s work, no two photos are the same: whether it’s the mug, the background, the quantity of tea, or the milk-to-tea ratio, it’s clear that these are different people being brought together from all over the world to honour people they never knew. The gesture is in the tea, but the connection itself is human, and deeply moving.

‘It’s interesting, because people held their teacups in different ways throughout the work. For me, it was something very beautiful, and personal, without being invasive. Hands are anonymous, but they’re still a large, important, and intimate part of who they are. All those hands, and all those teacups together… they mark something horrible, but they’re also pointing towards something else that could be beautiful.’

“Cups of nun chai; a memorial” is not Hunt’s first work inspired by Kashmir. “Paper txt msgs from Kashmir, 2009-2011” was created as a tongue-in-cheek response to the Government’s mobile phone ban. Hunt printed the paper text messages and circulated them within the region so people could write on them. By the time they returned to her, the project had grown to include a video and a book. ‘It was something that people in Kashmir were really ready to take part [in].’

The Blake Prize, for which Hunt was a finalist this year, has given both “Cups of nun chai” and “Paper txt msgs” wider recognition, overseas and in Australia. She’s glad to ‘have a stronger public profile for an Australia audience. That’s one of the best things about The Blake Prize. Also, relating nun chai to the spiritual and religious, which is something that operates at a number of different levels in “Cups of nun chai”.’

Hunt says she hasn’t yet started to focus on a new project — not while “Cups of nun chai” still has so much relevance. Next year, it will be serialised in a newspaper in Kashmir.

‘That’s kind of the next stage of the project, is to try and circulate the work back within Kashmir. It would be really difficult, if impossible, to hold an exhibition of “Cups of nun chai” there, at the moment, because of the political situation. Having the work published in a newspaper is a way of exhibiting the work: in an everyday context, in Kashmir, and reaching the audiences that an exhibition would never be able to.’

And people may even read it while drinking their nun chai.