Sydney Festival Review: Autocannibal is a gruesomely funny exploration into our apocalypse 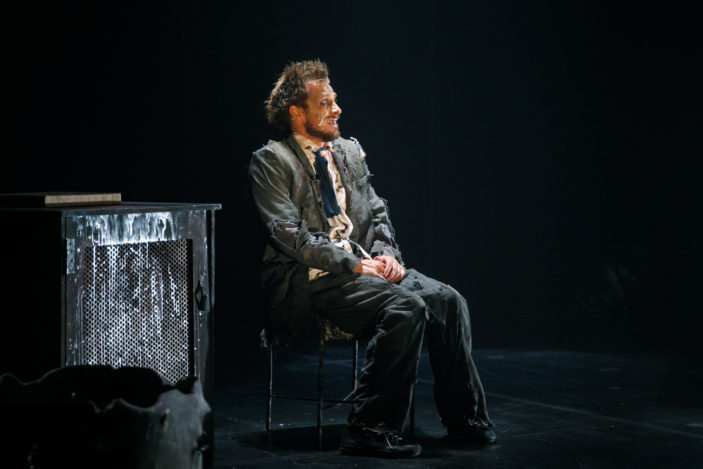 Autocannibal presents a dystopian circus exploring the nature of sustenance. Isolated as the only remaining human in a world bereft of food and water, our protagonist battles a sea of junk and plastic, avoiding the obvious reality that there’s only one thing remaining for him to truly eat.

Mick Jones is a versatile performer, delivering a one-man clown show melding mime, performance theatre and acrobatics. His comical delivery is engaging, contextualising the grim nature of the piece and placing it firmly into dark comedy. Saws and knives descend from the roof as a constant temptation toward the inevitable, while Jones makes smoothies out of hair and fingernails, exploring loneliness and madness. There are some gruesome moments – which are more implied than entirely visual – that push the audience’s boundaries and are hard to watch. In some parts this is an outcome of all of the show’s elements coming together nicely, but others come off a little too contrived.

Jones’ character seems to be a commentary on media and its role in the world’s destruction. Some of the more comical parts show his character as some sort of former newsreader in the previous world. A number of screens show reports of violence and destruction at the hands of climate change, however ultimately serve to oversubscribe the shows themes. Superb sound design by Bonnie Knight however supports the shows tonal shifts, creating a mood that’s equal parts sinister, comical and contemporary. Michael Baxter’s set is both simple yet effectively dark, surrounding Jones with old plastic and steel; elements of human construction that will never deteriorate.

While not for the faint of heart, Autocannibal is a fun exploration into the darker aspects of our psyche, and a great showcase of the performer’s abilities, even if it didn’t entirely intend to be.

Autocannibal was part of Sydney Festival. For more details about the festival, head to sydneyfestival.org.au.