Sydney Festival Review: Antarctica is a true blend of art and science into the unknown 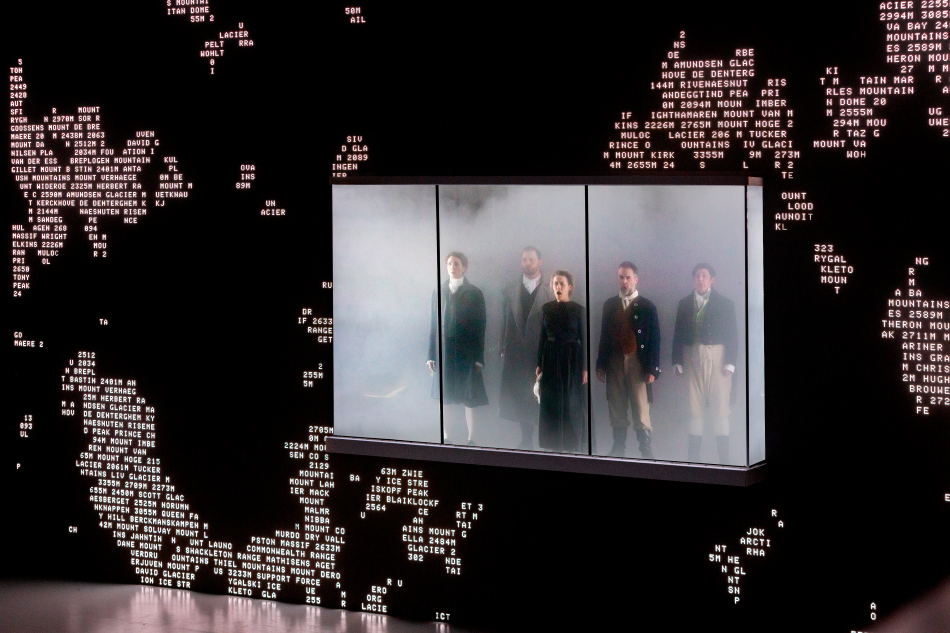 Antarctica is a new Australian exclusive opera performed by the Sydney Chamber Orchestra, jointly with The Netherlands’ music ensemble, Asko|Schönberg. It draws its audience in to the endlessness of the southern continent that is Antarctica. As the composers, Mary Finsterer (Music) and Tom Wright (Libretto) intended, the performance “hopes to awaken a vastness of thought”, which indeed it does.

It is glaring obvious that an incredible amount of research has gone into this production, which is densely packed into the 1 hour and 45 minute display. The content is split generally in three ways: the spoken word, the music (including opera singing and orchestra), and the very futuristic set including digital text that comes and goes and at one point, completely covers the stage.

The whole performance feels like an art installation, but instead of allowing the audience to wander around the artwork, we sit in the theatre unmoving. The singing artists stand behind a large glass plane and are seen only through there in the smoke haze.

The concept, a diverse group of individuals travel to Antarctica and offer their perspectives. This is delivered through dialogue (spoken voices include The Daughter [Eve Kreutz] and Interviewer [Tom Wright]) and song. The operatic singers include The Daughter (Jane Sheldon), The Theologian (Jessica O’Donoghue), The Natural Philosopher (Anna Fraser), The Cartographer (Michael Petruccelli), and The Captain (Simon Lobelson). Each of which give a mesmerizingly hypnotic and haunting performance.

The opera is sung in English (with English surtitles) and performed by the players noted above, from the Sydney Chamber Opera. Each opera singer captivated the audience as their voices enveloped the audience. Melancholic, stoic, fearful, and every emotion in between was captured by these stars. There also needs to be a quick mention here of The Daughter (actor) played by Hayden Holmes who was ever-present and provided another layer of complexity to the show (and boy did she have a lot of stamina for a young lady).

The orchestra, who commanded the stage when no other figure was present, were absolutely superb. Flawless in their performance. It is also worth noting here that Asko|Schönberg are reappearing as part of the Sydney Festival (which runs across the month of January) – tickets and more information are available HERE. Hailing from Amsterdam, Asko|Schönberg are really leading the way in new and experimental music composition.

Antarctica is really an incredible feat, to have so much talent in the one room, working together. In addition, the breadth of knowledge that pours onto the stage. And the technicality of the staging itself. It is a lot to take in all at once and will leave you thinking (and thinking, and thinking), just like the creators intended.

Antarctica is playing at Carriageworks from 5-8 January 2023.