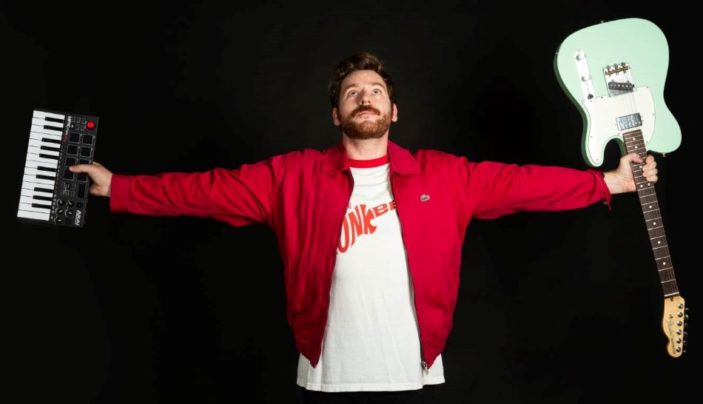 Nostalgia. It can happen to anyone, any time. The song that’s playing, that film you saw, the piece of memorabilia you found in your parent’s cupboard. They can spark memories of a time and place that you may have thought you’d forgotten. It’s those feelings of going back, remembering and sometimes cringing that Cameron James has brought to his new show, Electric Dreams.

From the start, you know this is going to be a severe flashback. Images of late ‘90s/early naughties films (think The Matrix and Fight Club), nu metal music (Korn, Limp Bizkit) and long discarded toys (Tamagotchi and Xbox) rotated on a screen, interspersed with classic dodgy ‘90s clip-art.

Cameron James planned on taking us back to his childhood and we were in for a ride. Only three props were required for this show. The screen, a guitar and his own, handwritten notepads, retrieved from his parent’s house, containing all of the emotions of a teenage boy.

As a young teenager, James was destined to be an entertainer, but it was music that he was obsessed with and it’s these stories, often personal, that he shares. From his first ever high school duo with the only other kid that played an instrument to the life-changing Battle of the Bands performance, the journey is both well-told, entirely cringe-worthy, but always hilarious.

Cameron James has the ability to pull you into the story and make you feel embarrassed with him, without judgement or pity. Ultimately, he also helps us accept that we’ve all had those moments ourselves, and that they are the pieces of the puzzle that make us who we are.

Sure, we may not have all written a song immediately after losing our virginity (note: please record “A Love That Makes The Roses Cry”) or competed in their own high-school fight club, but we all have our own intensely embarrassing, probably funny experiences to relate them to.

James doesn’t miss a beat for the hour-long show and the sold-out room was hooked on his journey. The pacing was excellent, filling out an hour with ease, but giving us all a chance to breathe and enjoy. The intermittent guitar breaks and songs were perfectly placed as interludes to the ever-evolving teenage angst.

The evolution of, not only, Cameron James as a teenager, but Cameron James as a comedian was on display here. Many years of podcast making have helped shape the path of story-telling, the laugh out loud moments and the heart-warming final twist. You will leave with a smile, a glow and comfort that your own cringe-inducing childhood is something to be proud of.

Reviewer attended 13th May.  Cameron will be performing again at Enmore Theatre on Saturday and Sunday, 14th & 15th of May. Tickets can be purchased HERE