Review: All About Women at the Sydney Opera House is the feminist fight song for a new generation, so listen up 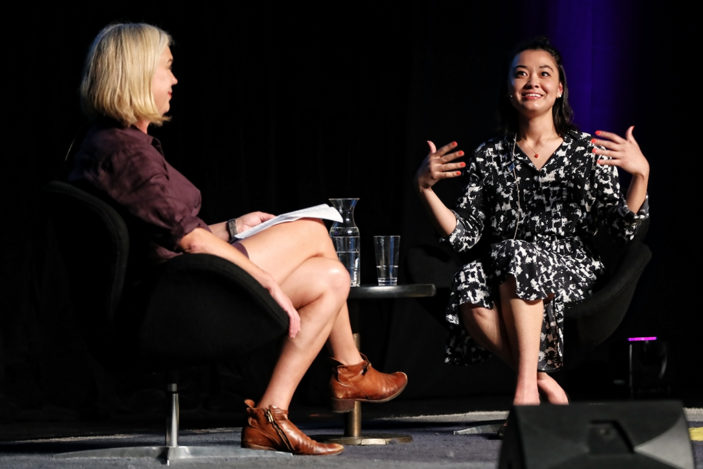 All About Women at the Sydney Opera House celebrated feminism with a line-up of powerful and inspiring innovators and thinkers. Coinciding with International Women’s Day (March 8), the festival was originally conceived to push back against the fact that, at the majority of conferences, most of the speakers tend to be male. What has evolved since is a safe space for women to express their experiences, their frustrations and feel empowered by the fact they are not alone.

In a day full of sold out talks, I attended four: “Abusive cultures”, “Is tech gendered?”, “No men, no meat, no machines” and “Know My Name”.

Hosted by Gina Rushton, journalists Jess Hill and Sanam Maher discussed violence against women and how it is often the sense of entitlement and shame which motivates men to commit acts of violence. As a journalist in Pakistan, Maher wrote a book about social media star Qandeel Baloch and her murder at the hands of her brother. Motivated by shame, the brother felt no remorse for what he had done. Instead, driving around their village, freely admitting to the murder. Hill further elaborated on this idea of shame as a catalyst. Discussing how men are often socialised to be unable to experience grief, fear, shame – anything that makes them feel vulnerable – so this inability to identify their emotions quickly turns to rage. People who feel shame often see ridicule where there is none. Hill terms this “humiliated fury”.

Maher was quick to clarify that the murder of Baloch was not about religion. And to define it as a “Muslim problem” is over simplifying it and a way for people to distance themselves from the issue. What is seen as “honour killing” in one country is murder in another and the author explained, “Religion has been weaponised”.

Hill made an incredibly important point, stating that in our current “call out” culture there is a risk of creating more shame. Instead, we need to ask: why do you speak like that? Why do you feel that way? We need to open the conversation. That’s the future.

Tea Uglow is a remarkable woman. Creative Director at Google Creative Lab, Uglow spoke with Maddison Counaughton about the history of gendered bias in tech and the ongoing changes Google is making in an attempt to remove men as the “default” for everything (eg. emojis).

Bringing her unique perspective to the conversation as a Trans woman, Uglow makes the valid point that when it comes to tech design, we are all guilty of designing for ourselves. And, when we do attempt to design for the ‘other’ (race, gender, culture, religion) we bring prejudices to the table. We need to design with, not for. Uglow asks, “What is the tech agenda? What’s their priorities? Do they reflect any women’s priorities?” There’s your answer.

So is tech gendered? Unsurprisingly, yes it is – because society is gendered.

No men, no meat, no machines

A panel discussion hosted by Fenella Souter with Amber Jackson, Kerryn Higgs and Sophie Robinson asks the very important question – is a feminist utopia possible? Higgs purchased land and founded Amazon Acres in 1974, an all-female community in northern NSW. Amazon Acres became a sanctuary for women who sought liberation and another way of being. Robinson, who spent some time interviewing women who lived on the land, remarked that these women fought against capitalism and the patriarchy and a society that did not understand them.

It was fascinating to hear from Jackson who lived at Amazon Acres from the age of 7 to 14 and what it was like growing up with such liberties and freedoms. After she left, she was afraid to get on a bus and she lamented that the culture shock was real and intense. But it was an ideal. Women who lived on the property developed skills they would have never known otherwise.

If there is one lesson we should all take away from these women’s experiences it is that a life lived with intention is a fulfilling one. And while we may not all be able to escape to a remote community, we can all bring a little more intention into our lives.

This was by far the most powerful talk of my day. Chanel Miller spoke to Edwina Throsby about her sexual assault at the hands of a man she did not know during a party at Stanford University. Outlined in her book Know My Name, Miller talked about how pressing charges was “something I couldn’t not do” and she realised that this legal process which she viewed as a burden, was actually an opportunity. One that most victims of sexual assault are never afforded.

While the media promoted the perpetrators “accomplishments” as a supreme athlete, Miller was ‘Emily Doe’. An unknown victim with no voice. Due to the fact that Miller couldn’t remember the assault, she couldn’t control the narrative. She also realised that the defence didn’t have to convince the jury of anything. All they had to do was break her and make her doubt herself. She states, “Your story is no less valid because there’s a piece missing.”

He never said sorry. He was found guilty and sentenced to just six months. This is ‘justice’. So Miller continued to fight and she had the law changed. A truly remarkable woman, Miller commented, “I want us to not have to fight for our own humanity.”

But it seems fight we must. We live in a country where, on average, one woman is killed a week by a current or former partner. Where women are earning 14% less than men for the same work. Where only 17.1% of CEOs are women. And it’s not good enough.

All About Women is imperative for the ongoing narrative around gender equality and our fight to be heard and recognised.

We will not make ourselves small.

We will not “calm down”.

All About Women fuels the fight song of a new generation and it’s time to warm up those vocal chords.

All About Women took place at the Sydney Opera House on March 8, 2020. For more information head to the website.