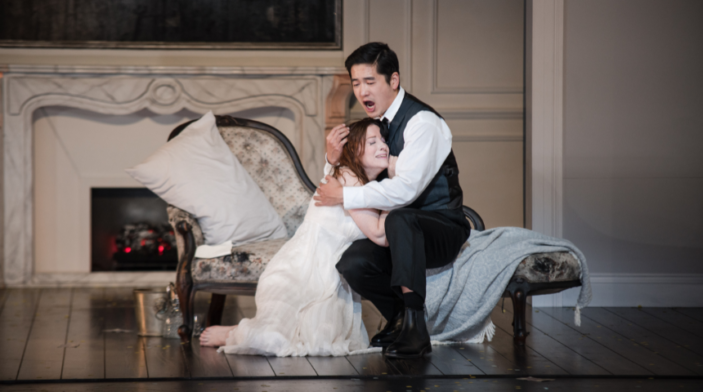 A joint venture between Opera Queensland, State Opera South Australia, and West Australian Opera, the classic opera tells of the doomed love between the beautiful courtesan Violetta and her devoted partner Alfredo. Taking a chance at happiness, they leave Paris behind, building a life for themselves far from the wild parties and opulence of the city. But no one can out run their past, and soon Violetta has a terrible choice to make. Can she sacrifice her own love story if it means another can thrive? What is more important: love or honour?

La Traviata has long known how to tug on audience’s heart strings, and there was more than a few people likely pleased that their masks hid their trembling bottom lips as the opera’s tragic finale rolled around. Gore and Wang are phenomenal as Violetta and Alfredo, with Gore a particular stand-out. She’s a tour-de-force on the stage, bringing Violetta’s complex character to life through song and movement alike.

Scenes featuring the rambunctious Parisians always brought a smile, with Hayley Sugars‘ Flora Bervoix and her coterie of courtesans and clients adding plenty of levity. They’re a loyal bunch to be sure; when a distraught Alfredo exacts his revenge on Violetta, it’s the soprano they side with, loudly calling Alfredo out for his behaviour. It’s a powerful moment, and feels surprisingly modern for an 19th century work.

Props must also be given Charles Davis and team for their incredible sets and costumes. Keep an eye out for Violetta’s astonishing pink and gold number in the second act – that gown will live rent free in my brain for a long time to come.

Under the direction of Sarah Giles, and with Dane Lam on hand to lead the Queensland Symphony Orchestra, La Traviata is an absolute triumph. Beautifully performed and inventively staged, there’s a reason this tragic tale of love and loss is one of the most performed in the world. Brisbane theatre-goers, do NOT miss this – and do NOT forget the tissues!