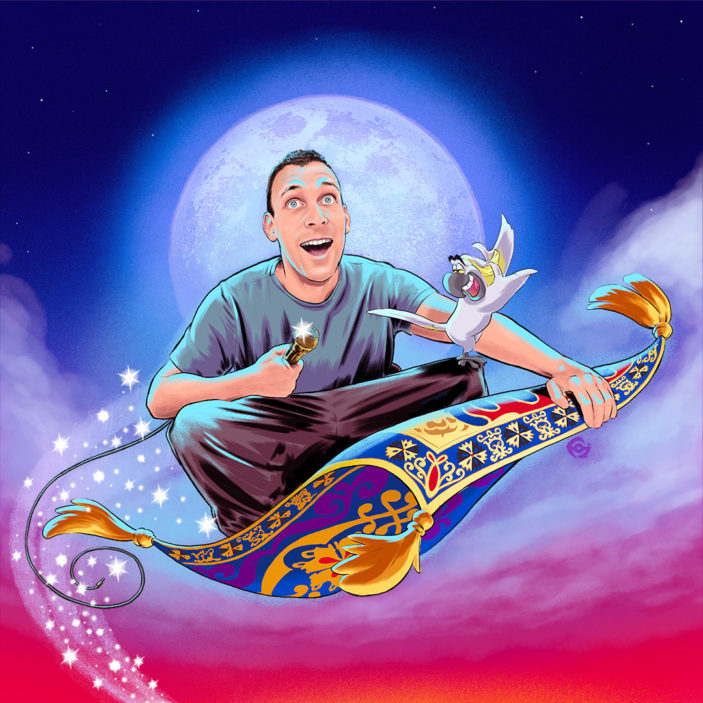 Michael Shafar is a Jewish lawyer turned comedian who relates his cancer recovery in his stand up shows. We chatted ahead of his upcoming season at the Adelaide Fringe.

How did your show go back at the Fringe – was it two years ago or last year?

I mean it feels like it’s a decade ago, no but it was last year – March.

It’s hard to imagine that we managed to get away with it.

It’s crazy and Melbourne Comedy Festival somehow went off without a hitch. I can’t believe that happened.

Everything is being cancelled left right and centre it’s just ridiculous, so fingers crossed this Adelaide Fringe coming up still manages to survive.

I think Gluttony and the Garden are pretty much full outdoor again, so it mitigates some of the concerns, but you know particularly in South Australia they sound like they’re very intense the health authorities over there. I was there over the New Year break and literally, every restaurant we were planning to go to was calling to say they had to shut down because of close contact and everyone had to go into isolation.

What have you been doing over the pandemic to keep yourself busy?

Good question – I joined Tik Tok and I’m making stuff for that. I started doing jokes about anti-vaxers. I couldn’t do gigs so the only way that I can write and test material is to write something and then put it out there and see if people liked it.

I was making jokes about anti-vax and that was very polarising. I kind of had good feedback and negative feedback on that, so usually when something is polarising, that usually suggests that I should keep working on that because that’s what people were interested in. Now I’m just trying to put out some more political stuff and stuff it’s a bit more – I’m not sure like edgy is the word – you’ve seen my style of comedy and I do like to push things as far as I can.

I mean that that’s the point with your comedy. I remember the cancer jokes being the most controversial ones and it made me think about why do we find some topics so controversial? For example, cancer seems to be something that you just don’t joke about, yet you do.

I think that’s true. It’s kind of taboo but because I’ve got my own cancer experience, I’m one of the few comedians I feel justified in talking about it and making jokes about it, so I’ll kind of use that privilege. There are some topics that I don’t really feel like I have any authority to really talk about, so I try to stay away from them. So if I’m ever talking about racism or prejudice or bigotry, I like to try to come from a Jewish perspective. That way I’m justified in talking about it. My grandparents are Holocaust survivors, so if I’m ever to talk about those topics I find it the best way of talking about it is explaining why it matters to me. The same thing, to talk about cancer it would be weird to just talk about cancer as a concept without talking about my personal experience with it.

There was a lot of times during the show when people are thinking, “Am I allowed to laugh at this or not?”

Yeah, that happens a lot. I really like that and I also think that particularly in Adelaide I noticed that. I find that Adelaide crowds are very progressive and very educated and they kind of understand that what you’re talking about is like, you know, real and serious. So that can sometimes hold you back from laughing. For example, I would talk about my cancer experience and the crowd are so empathetic and nice, so they don’t want to laugh at me. I’m talking about a topic I’ve chosen so you’re meant to laugh. Once you get people to overcome that barrier it’s fine. It’s working out a way to break that tension which can be a bit tricky.

It feels like you’re sort of taking the audience along and you’re saying to them it’s OK, come with me, you can laugh.

Yeah exactly. I’m trying to get them to like chill out and feel comfortable and trust that it’s going to be OK. Don’t worry, you can laugh and no one’s gonna judge you. If I can get the audience to that position, then it’s a fun show. It usually takes a few minutes to warm up; if you had a drink it probably takes less time.

Tell me about the fake news scandal you were involved in recently in China.

So funny – it’s my favourite thing from last year. During lockdown last year I’m writing material about anti-vax and putting it out on Tik Tok. I made a joke about a guy who was selling a prosthetic arm on Facebook. It was a proper medical arm that he was selling for $1500. It looked real so the idea was that you would hide your real arm and pop on this fake arm, go to the appointment and they stick the needle in the fake arm. I did a little joke about that about what a fantastic idea because you know I’m sure that the trained medical professional would have noticed that it’s limp and cold and that it doesn’t match the rest of your body. Two days later the Daily Mail picked up the Tik Tok video that I made, and they ran a headline that said like anti-vax are selling prosthetic arms to people in Melbourne. When they ran the headline, they used a photo of me from the video, so it made it look like I was the anti-vaxer. Fortunately, when you actually read the article (if anyone really does) it explains I’m on the comedian making fun of it.

Two days after that, a friend of mine who is Chinese and uses the WeChat social media site, said do you know you’re going viral on it right now. The WeChat article that’s circulating with hundreds of thousands or millions of views is clearly taking the Daily Mail article and made me to be the guy selling the arm. The whole article is like, you know Michael Shafar, an Internet celebrity in Melbourne is selling this arm on Facebook and it’s like they would simply go to town, like he was selling on his live stream, people were queuing up. Even better is that they must have done some research about me because they started writing about how I had cancer previously and how ironic it was that I relied on science to treat my cancer but now I’ve joined the anti-vax anti-science movement to make a quick buck.

Really the government is just trying to get everyone vaccinated and it kind of makes fun of me and this idiot so I’m just like a martyr for the vaccination campaign in China. Honestly, you know what, it’s a good purpose at least my reputation in China has been sacrificed for a good cause.

Does that mean that the chances of you going to China soon is pretty low?

I mean they’ve been low for the last two years and so it probably had gotten lower. I’d love to go to Hong Kong and I know Shanghai and Beijing have clubs. I’d love to go but I’m terrified that when I arrive at the airport they’re gunna be like this guy is anti-vax and spreading this information and you never hear from me again…

That raises a whole topic of going viral; you had success with Tik Tok so how true to yourself do you need to be or can you sort of twist the truth a little bit?

I find that stand up that works best is just kind of saying things that I really believe and being authentic to myself, talking about my own personal experiences. Sometimes of course you’ll embellish those things a little bit and you might play a heightened version of yourself, but overall, it’s still kind of me. I kinda think that I’ll just take that approach to making stuff for online as well. You know it just resonates. I find it to be too much of an effort to make things up or whatever it’s just too tiring.

It seems to me that it’s opened opportunities for people like yourself and so many people who are living their life. It’s not just comedians but people who are Outback fishing or doing home renovations. It’s given them a channel for a voice, that they wouldn’t have had before.

I feel like that when you’re a comedian, you really just want to get as many people to see your jokes and your comedy as possible. There’s always gonna be people who hate that and just hate everything but you don’t need those people. You need the people who like it. So if it’s 5% of the people who seem to like it, and want to follow me you know that means I need to get my stuff in front of 100,000 people to get 5,000. I believe in accepting the fact that 90% of people are gonna hate me and probably you know gonna give me shit in the comments. To be honest I find that quite funny. I’ll screenshot my favourite comments and then share them. The most insane people are when you’re doing anti-vax stuff. Those people mean I get more material and it just kind of becomes a bit of a cycle.

Your show coming up in Adelaide, I guess it’s gonna cover all these topics we’ve talked about?

I try to keep it pretty topical, so I’ve got the show ready to roll, but I’m always trying to add stuff to it based on what’s happening. Two weeks ago, I didn’t have any jokes about Novak Djokovic, now I do. I didn’t have any jokes about Australia Day but now I’ve got some stuff about Australia Day that’ll probably work. So, it’s always evolving which I really like. Even though I’m just doing this over a week the show on the first night and the final one will be chalk and cheese.